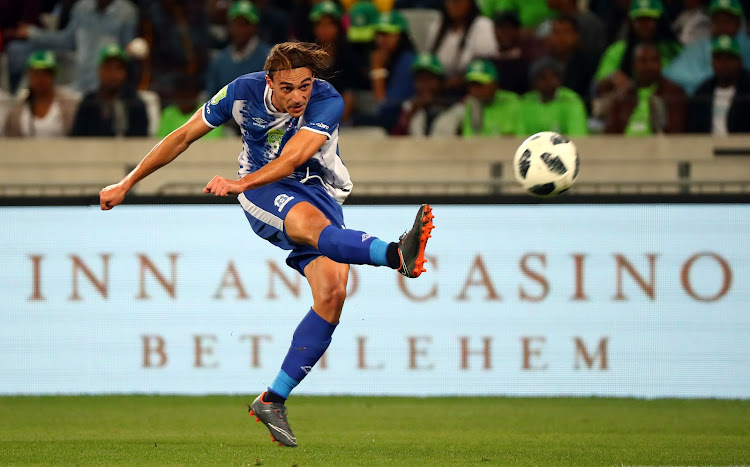 Maritzburg United's Belgian striker Andrea Fileccia has told of his desire to play for Bafana Bafana once he qualifies for South African citizenship at the end of the current season.

Fileccia was brought to SA at the beginning of the 2014/15 campaign to join Free State Stars by his compatriot Tom Saintfiet‚ who was then coach of Ea Lla Koto.

“I'm a striker and my job is to score goals and I think if selected I can contribute goals for Bafana Bafana‚” the Maritzburg striker told SowetanLIVE on Friday.

Fileccia would have spent five years in the country at end of the current season which qualifies him for citizenship and‚ should the SA Football Association (Safa) approach him‚ the 26-year-old striker said that his answer would be “a big yes.”

“Also for the fact that I’ve been playing in the PSL for so long now and that I know the players well and the playing culture‚ so for me if I get an opportunity to play for Bafana I won’t have to do a lot of adjusting as I know the players very well.

Fileccia's fancy for Bafana was tickled by a letter he came across in a local soccer magazine in which a fan made a plea to football authorities to naturalise the Belgian striker and rope him into national team.

The Maritzburg striker‚ however‚ revealed that the idea to play for Bafana has “sometimes crossed my mind.”

He said that the idea was reignited when he came across that letter.

After reading the letter‚ Fileccia then posted it on his Twitter account with the words "Make Fileccia a South African…what do you think about that?"

❗️ MAKE #FILECCIA SOUTH AFRICAN ❗️
〰> What do you think about that ❓🇿🇦

The Belgian got a positive feedback with some saying the national team can do with a player of his caliber.

“For me that was a big surprise (seeing the letter in the magazine) you know‚ I was feeling very good. Bafana Bafana is a big brand‚ it is something big.

“Who knows maybe one day (when I qualify for SA citizenship) whoever is the national team coach can recognize me. I’m never going to say no to that‚” Fileccia said with a laughter.

"I can play in different positions. Maybe one day if I’m called up (to the Bafana squad) I promise I will be able to give my best."

The Belgian scored nine goals in all competitions for Maritzburg and was instrumental in the team’s march to their highest-ever finish in the Absa Premiership and runners-up place in the Nedbank Cup.

Fileccia said he played for the Belgium junior national teams from Under-15 to Under-23 level but his progression up the ranks was hampered by injuries.

“I played in the same age groups as Christian Benteke‚ Kevin de Bruyne and Thibaut Curtois.”

The furore over Stuart Baxter appointing his son to Bafana Bafana this week could have been avoided had the coach finalised his technical team the ...
Sport
3 years ago

Kamohelo Mokotjo almost permanently seems to be on the verge of a Bafana Bafana breakthrough.
Sport
3 years ago
Next Article