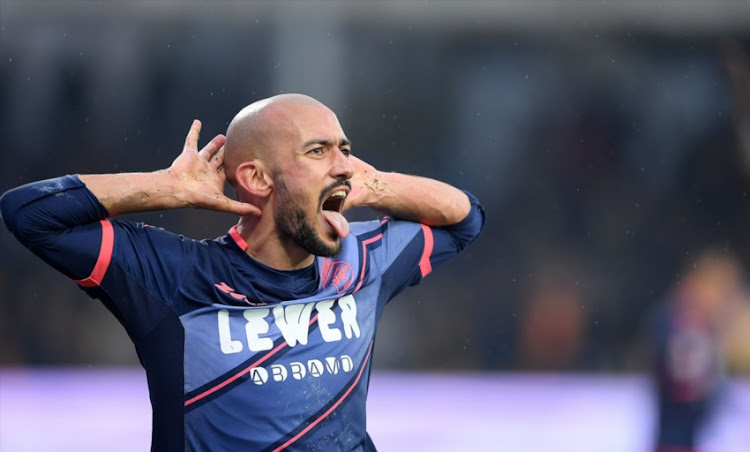 Ahmad Benali of FC Crotone celebrates after scoring the 2-2 goal during the serie A match between Benevento Calcio and FC Crotone at Stadio Ciro Vigorito on February 18, 2018 in Benevento, Italy.
Image: Francesco Pecoraro/Getty Images

Libya have been very quiet in the build-up to the African Nations Cup qualifier against South Africa in Durban on Saturday as they prepare to resume their bid to reach Cameroon next June.

The team have performed admirably of late‚ despite the security situation in their country not allowing them to play fixtures in Libya‚ and what they have proven is a tough nut to crack with only five defeats in their last 19 internationals.

SowetanLIVE looks at five of their top players who could potentially be in action against Bafana.

The stalwart goalkeeper and usual captain of the side has been a rock at the back since making his debut in 2011.

The 30-year-old was massive for the side in the 2014 African Nations Championships in South Africa‚ where he helped them to three penalty shoot-out victories and even scored the winning spot-kick himself in the semifinal against Zimbabwe.

He plays for local side Al-Ahli Tripoli.

Elhouni is a left-winger who currently plies his trade for Portuguese top-flight side Aves‚ who he joined after two barren years at Lisbon giants Benfica.

The 24-year-old is known for his pace and trickery on the ball‚ and has started the new season well for his club.

He scored in Libya’s 5-1 victory over Seychelles in their Nations Cup qualifier opener last year‚ and also got the winner in a 1-0 win over Guinea in the World Cup qualifiers in November.

One of the more well-known of the Libyan players is English-born former Manchester City midfielder Benali‚ who is currently with Serie B side Crotone.

The 26-year-old has enjoyed previous stints with Italian sides Brescia and Pescara and is a former England youth international who was once touted for the very top of the game.

The attacking midfielder also netted in the victory over Seychelles.

Ellafi is a star for Saudi Arabian side Al Shabab after his eye-catching exploits for Al-Ahli Tripoli in the African Champions League earned him a big-money move in January.

The 22-year-old‚ who has also previously had a spell in Portugal with Santa Clara‚ is a goal-scoring winger who will pose a big threat to the Bafana backline with his guile and clever use of the ball.

Musrati has been a stalwart of the Libyan national side since 2014 having emerged at Al-Ahli Tripoli and cemented his spot in the team.

Hopefully somebody has been on the phone to Bongani Zungu‚ Haashim Domingo or Thibang Phete‚ who have all either previously or currently are teammates of the Libyan at Portuguese top-flight side Vitoria Guimaraes.

In fact‚ he played alongside Phete in midfield in a 2-1 win for the club on Sunday away at Sporting Covilhã.