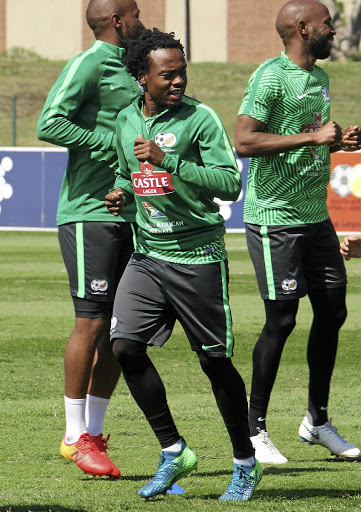 Belgium-based Percy Tau will be a marked man in tomorrow's Afcon qualifier between Bafana Bafana and Libya at the Moses Mabhida Stadium.
Image: Anesh Debiky/Gallo Images

Amrouche considers Tau a big threat and hopes his defenders can stop him.

"You know me as Adel, there's one player that I like [in the Bafana squad] and he plays for my [former] team in Belgium. I like him as a player and a man; he's always happy and that is Percy Tau," Amrouche told Sowetan ahead of the clash in Durban.

Born in Algeria, his coaching career includes a couple of stints with Tau's new club, Royale Union Saint-Gilloise, which he served as technical director.

In fact, Amrouche wants to use his contacts in the European country to help Tau secure a move to the top league. Saint-Gilloise are a second-division club.

"After we finish [playing Bafana] I hope I can help him find a big club in Belgium, because he's a good player. He'd be great in the future."

But before acting on his admiration for Tau, he has to contend with Tau's threats over his defence.

Also of concern for him is his players' mental state coming from a country where the tenuous security situation has resulted in their national team playing home games in neighbouring countries like Egypt.

"Also, the league there is a special league because you play one game and after that you take a rest for 20 days," said Amrouche, who's been at the helm since April.

Libya registered a 5-1 win against Seychelles in their first match of qualifiers last year and could possibly be happy with a draw in SA, but Amrouche said he is not in South Africa to "cheat" with time-wasting tactics.

He explained: "When people come [to] watch my team play, they will see attractive football; I'm not here to cheat.

"You don't see my players touched and stay down for 10 minutes crying."