Solinas's second-guessing of himself proves costly to Kaizer Chiefs 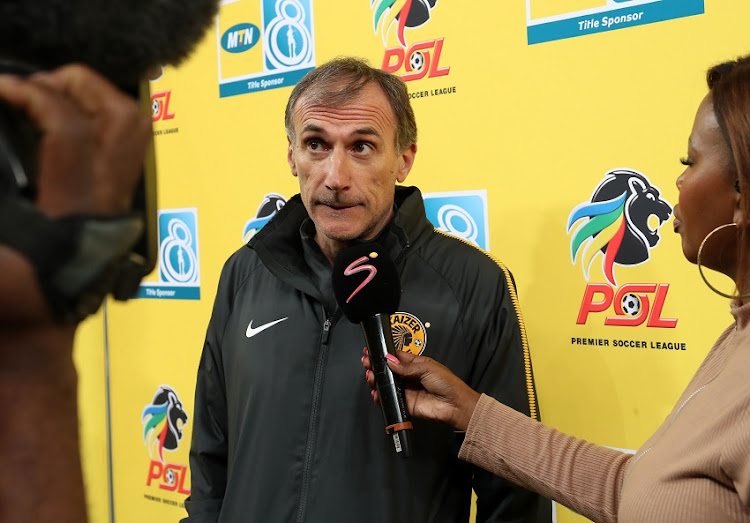 Kaizer Chiefs coach Giovanni Solinas says he did not react to criticism during the week with a changed gameplan that backfired in his team's 1-0 MTN8 semifinal defeat against SuperSport United at FNB Stadium on Saturday night.

After three trophyless seasons for Amakhosi, new coach Solinas's job just got tougher as Chiefs bowed out of 2018-19's first cup competition 3-2 on aggregate against SuperSport.

Chiefs seemed to be suffering from an identity crisis in the second leg.

After Wednesday's 2-2 league draw at FNB against Bloemfontein Celtic Solinas was questioned, including by his own striker, Leonardo Castro, for continuing to attack at 2-0 up, seemingly playing a part in blowing what would have been a valuable first league win for the coach.

Solinas had defended not bringing on defensive midfielder Wiseman Meyiwa to close up shop, saying he did not want to move Khama Billiat from second striker.

Confusingly then, Solinas did just that, and not just with his substitutes, but his starting lineup, against SuperSport. He brought in Meyiwa as a starter in central midfield next to Willard Katsande, pushing Siphelele Ntshangase up to striker and moving Billiat to the left.

The coach admitted the change disrupted an attacking flow from the beginning of the game that had been Chiefs' one strength this season.

Solinas was asked if he had reacted criticism and Castro's comments.

"No," he said. "It's because our idea was to cover with a much better central midfield. We chose Wiseman to help Katsande in his defensive job.

"Because SuperSport play three in the middle, we wanted to put pressure on the SuperSport midfielders."

Amakhosi looked more solid than their porous performances this campaign, and in a semifinal where a 0-0 draw would have been enough to progress on away goals perhaps that might have been enough.

But a more assured SuperSport capitalised on what seemed a muddled approach from Amakhosi, and Bradley Grobler's 58th-minute strike put Matsatsantsa into the final.

Solinas now has been criticised twice for his tactics in a week. A week in which Chiefs missed out on a first league win and place in a cup final, both of which would have gone a long way to shoring up the 50-year-old Italian's position in the country's hottest coaching seat after a nervy start.

His second-guessing of himself is most concerning. Bringing in Teenage Hadebe to rectify a central defence that had been put under pressure by Daniel Cardoso's shaky start to 2018-19 could have been enough to solidify Chiefs. Introducing Meyiwa too, as a starter, was an over-correction.

"The idea was to start protecting our defenders with our two defensive midfielders. And we put Ntshangase forward, like a No.10, to give the good pass, and assist the strikers," Solinas said.

"It's a pity because we conceded this goal. It's disappointing because everyone in the Chiefs family wanted this final. We needed this final."

Solinas has walked into an unbelievably tough situation at Chiefs, arriving a month into the preseason, and his record of no major trophy raising question marks of his credentials to turn around Amakhosi's barren spell.

Such a scenario requires nerves of steel and assuredness. So far the coach has shown himself to be more nervy and self-doubtful.