SuperSport dump Kaizer Chiefs out of the MTN8 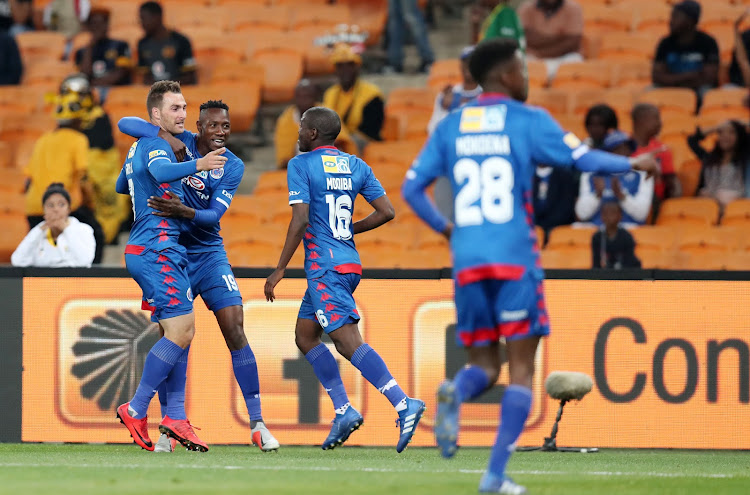 A tightly-contested MTN8 semifinal second leg played into the hands of organised SuperSport United, whose 1-0 advantage saw them beat Kaizer Chiefs 3-2 on aggregate at FNB Stadium on Saturday night.

Chiefs coach Giovanni Solinas would have loved a cup final to ease the pressure he is already under in the country's hottest coaching seat. A 0-0 draw would have been enough on the away goals rule.

But Tembo's rigid SuperSport were the more assured in their gameplan on the night, keeping to their shape and discipline and taking advantage of an Amakhosi seemingly suffering an identity crisis.

Solinas debuted new signing Godfrey Walusimbi at left-back for Siphosakhe Ntiya-Ntiya. Teenage Hadebe replaced Daniel Cardoso, who has had a nightmare start to the season, in central defence.

The coach shored up his midfield, bringing in the defense-minded Wiseman Meyiwa for Siphelele Ntshangase, who was pushed up to second striker.

That meant the coach had to do what he said he did not want to - push Khama Billiat out on the left.

The changes did make Amakhosi more solid than the porous combination who drew 2-2 twice - in the semi first leg against SuperSport in Atteridgeville and then against Bloemfontein Celtic in the league at FNB on Wednesday night, blowing a two-goal lead.

But it detracted from Chiefs' attractive, adventurous attack they had displayed. Against a far sterner defence than Celtic had offered, and a SuperSport combination looking to play on the counterattack, it meant less chances all-round.

SuperSport edged the first half. They could have taken the lead in the 15th minute when Clayton Daniels was free to head Aubrey Modiba's free-kick from right midfield onto the upright.

Willard Katsande's overhead clearance in front of Evans Rusike in Chiefs' box was crucial, with SuperSport's Zimbabwean striker managing a shot at Itumeleng Khune from the rebound.

A minute before the break Katsande made a monstrous challenge in his area, burst into space, released Leonardo Castro down the right and took the return pass, but pulled his shot wide across goal.

SuperSport opened the scoring through a clinically-applied passing move down the left side, Evans Rusike feeding Reneilwe Letsholonyane into the area to square for Grobler, who beat the challenge of Siyabonga Ngezana and calmly finished past Khune.

From Mphahlele's cross Zuma half-volleyed over. Castro teed up Ntshangase on the edge of the box, who struck wide.