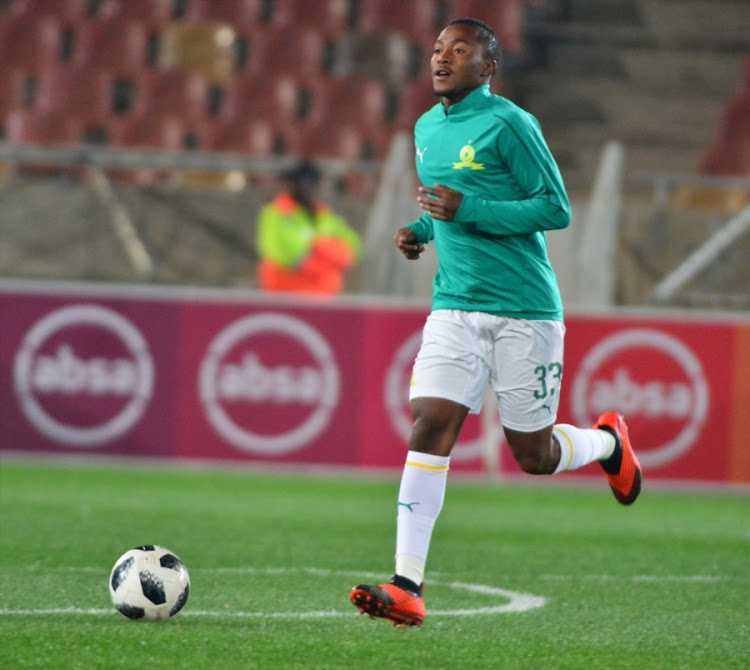 Lebohang Maboe of Mamelodi Sundowns warms up ahead of a Absa Premiership away match against Polokwane City at Peter Mokaba Stadium on August 07, 2018 in Polokwane, South Africa.
Image: Philip Maeta/Gallo Images

Lebohang Maboe never got to see his father Sidwell play but the Mamelodi Sundowns forward is determined to emulate his famous parent and also win silverware.

Maboe senior made a name for himself in the 1990s at Orlando Pirates‚ Bloemfontein Celtic‚ AmaZulu‚ Free State Stars and SuperSport United and won the BP Top 8 and the Bob Save Super Bowl.

Maboe junior is determined to continue his family’s legacy after joining Sundowns recently and is also eyeing a place in the national team.

“I was too young to watch him (his father) play but when I was growing up in Heidelberg‚ I always heard people talk about how he used to play‚" said the 23-year old as Sundowns prepare to take on Golden Arrows in the MTN8 quarter-final on Saturday.

"That inspired me to keep on grinding because I knew it was possible to do it."

Maboe Jnr‚ who scored his first goal for Sundowns in his full debut‚ admitted that having a parent who is a former professional player is challenging because of the way he critique him.

“As a parent he encourages me to always work hard and behave in a professional manner on and off the pitch‚" Maboe said.

"But he gives me a lot of stick when it comes to my performances.

"He always calls me after games to comment on how I played and sometimes he is hard on me.

"Sometimes I feel it’s unnecessary but I have grown to understand that as a father he wants the best for me.

"Obviously I listen to my coaches but I also take his advice because he used to play professional football.”

He also helped the team to reach the Nedbank Cup final where they lost to Free State Stars.

But he admitted that he needed a bigger challenge.

“I felt that I was ready to join a bigger team‚" he said.

"Sundowns is such a team in Africa because they sent players overseas and that was one of the reasons I wanted to join them.

"It is not going to be easy because of the competition for places but I will always have to produce my A game all the time and believe in my abilities.

"This is an opportunity for me to play in the Caf Champions League‚ boost my chances of playing regularly for Bafana Bafana and maybe going overseas‚” he said‚ adding that the move to Sundowns happened quickly.

"It was like I was dreaming and it only hit me when I arrived at the club’s offices that it is actually happening and time to start working again.

"I sat down with the analysts here at Sundowns and they showed me how the team plays and how they want me to play.

"It was actually helping because as you can see I am combining well with the my new team-mates.”

Mamelodi Sundowns moved to second spot on the Absa Premiership standings with four points after a 2-0 win over Polokwane City at Peter Mokaba Stadium ...
Sport
3 years ago

Sundowns striker wait on Swedish side Djurdardens verdict after trial

Bonginkosi Ntuli is still waiting to hear if he has done enough to earn a loan move to top Swedish side Djurdardens‚ but is enjoying his 10-day trial ...
Sport
3 years ago
Next Article