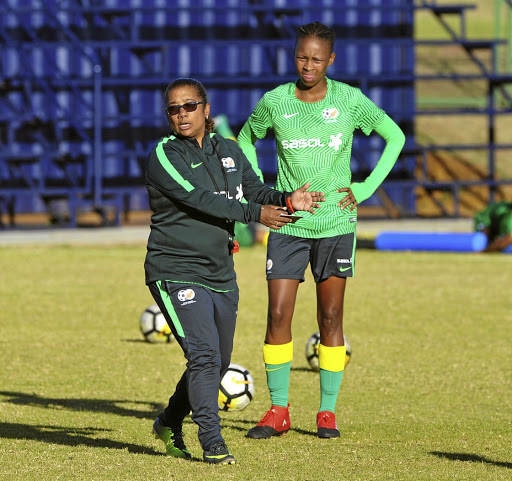 Desiree Ellis, coach of South Africa, has urged Safa to organise quality opposition for Banyana in the build-up to the Ghana Afcon.
Image: Sydney Mahlangu/BackpagePix

After securing their berth in the upcoming Women's Africa Cup of Nations, Banyana Banyana coach Desiree Ellis has vowed to rewrite history by taking the SA senior women's national team to their first Fifa World Cup, to be hosted by France next year.

Banyana clinched their spot in the next edition of the Afcon, which will be staged in Ghana later this year, after thumping neighbours Lesotho 7-0 on aggregate in the final round of qualifiers.

Though they would qualify for the World Cup even if they finish third in Ghana, Ellis wants to book the World Cup ticket in style by guiding Banyana to their maiden Afcon triumph.

"We want to rewrite history by winning the Afcon for the very first time. That would see us qualify for our first World Cup as well. We can achieve all these goals with proper preparations and planning," said Ellis.

The Banyana mentor is of the view that the previous failures in qualifying for the World Cup were the result of poor planning, urging the SA Football Association (Safa) to organise Banyana competitive opponents for friendlies leading up the Afcon.

"In 2016 [when they finished fourth in the Afcon and missed out on a World Cup spot] we played [friendlies] against Zimbabwe, who were in our group and we also played Egypt.

"I don't think those games were ideal preparation," said Ellis.

"This time around we will first look at the draw but we would like to play friendlies against the likes of Nigeria, Ghana and Cameroon... maybe even an international team if we can get one."