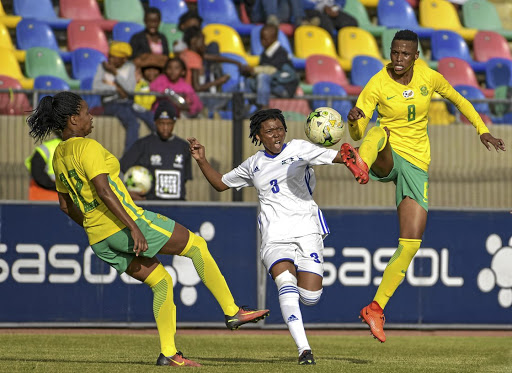 Banyana Banyana have qualified for the Africa Women's Cup of Nations finals scheduled for Ghana this November after walloping hapless Lesotho at the Petrus Molemela Stadium in Bloemfontein yesterday.

A double each by Jermaine Seoposenwe and Chantelle Esau, as well as a goal each from Hilda Magaia and Leandra Smeda, helped Banyana to a 6-0 win that secured a 7-0 aggregate win.

True to coach Desiree Ellis's prediction, the girls gave full value in their emphatic win as they ran riot in front of a good crowd.

The win keeps Ellis and her charges on track to reach the women's Fifa World Cup in France next year.

Leading 1-0 from the first leg, Banyana Banyana were off the blocks early and Esau could have doubled that advantage but put her effort wide.

But moments later Seoposenwe doubled the hosts' advantage when she outsprinted the Lesotho defence and buried a good angled shot.

It was one-way traffic as Ellis's charges ran riot.

Kgaelebane Mohlakoane was having a good game on the right flank and twice came close to scoring in the opening 15 minutes. With Lesotho looking shell-shocked, the hosts played with conviction and flamboyance, which have become the hallmark of their recent game.

Smeda then came face to face with the Lesotho keeper but her effort was well saved in the 28th minute.

Soon after half time captain Refiloe Jane miscued her shot when she was put clear.

Esau made it 3-0 on the day with a good finish a few moments after the restart.

Seoposenwe also completed her brace when she made no mistake from just inside the box in the 59th minute to make it 4-0 on the day and 5-0 on aggregate. - Safa Media