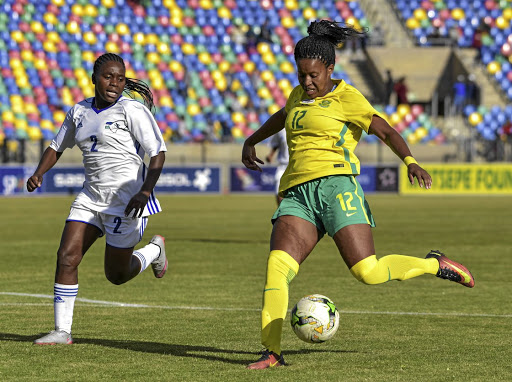 When she was given the Banyana Banyana coaching job on a permanent basis in February, Desiree Ellis was mandated for three tasks - qualifying for the Women's Cup of Nations, the Olympics and the World Cup.

Having passed her first assignment of qualifying for the next Cup of Nations, to be hosted by Ghana later this year, Ellis still has a mountain to climb in ensuring that she takes Banyana to next year's Fifa World Cup in France and gets SA a spot in the 2020 Olympics in Japan, Tokyo.

Banyana confirmed their involvement in the upcoming Afcon by demolishing neighbours Lesotho 6-0 in Bloemfontein on Sunday.

In the wake of their Afcon qualification, Banyana striker Jermaine Seoposenwe has affirmed that they are aware that the job is not yet done, saying their ultimate objective was to qualify for the World Cup and the Olympics.

"We are proud that we've qualified for the Cup of Nations but we cannot get carried away. The ultimate goal is to go to the World and the Olympics, that's non-negotiable at all. We have to prepare well and make sure that we're mentally strong," Seoposenwe said.

SA will host 2018's edition of the Cosafa Women's Championship towards the end of the year. Seoposenwe feels this regional tournament is a great platform for Banyana to prepare for Afcon - the tournament that will decide their World Cup fate. The hosting city is yet to be announced.

"We need to take this type of showing [the win over Lesotho] to the Afcon. The upcoming Cosafa Cup will help us to prepare for the Afcon, we will take it seriously but we need to use it to sharpen ourselves for the Afcon," noted the Banyana striker, who scored a brace against Lesotho.