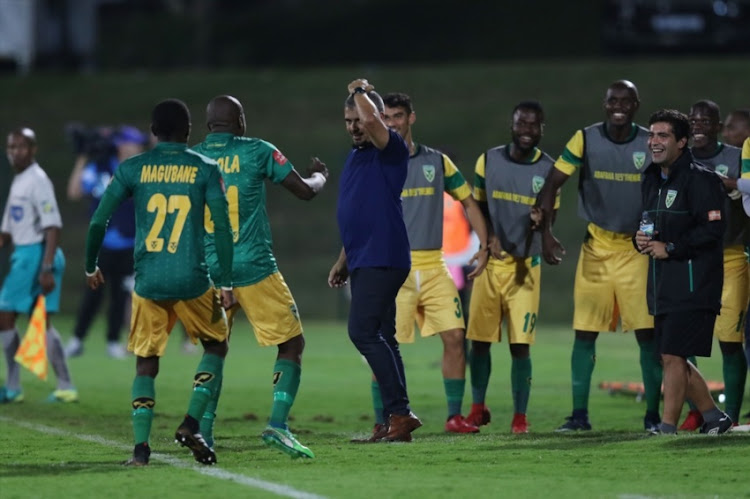 Kaizer Chiefs began life after Steve Komphela with a 3-1 loss to Golden Arrows here in KwaMashu, north of Durban.

Lerato Lamola bagged a brace and Velemseni Ndwandwe added a third towards the end. Bernard Parker scored his 50th Chiefs goal for some consolation.

Three days after Komphela resigned after Amakhosi's 2-0 defeat to Free State Stars in the semifinals of the Nedbank Cup played at Moses Mabhida Stadium where the fans rioted, invaded the pitch, beat up security guards and vandalised equipment, the atmosphere was different here probably because of the heavy police presence or because they finally saw the back of Komphela after three years with no silverware.

Chiefs football manager Bobby Motaung, who just a few weeks ago was heckled at FNB Stadium when Chiefs lost 3-0 to Chippa United, cut a relaxed figure as he made his way to the VIP section. The Chiefs fans, who have always been demanding that he should sack Komphela, gave him a warm welcome.

Out on the field, there was nothing welcoming about Arrows' approach to the game.

Abafana Besthende applied a pressing game and with the Chiefs defence in sixes and sevens, Lamola fired home with his attempt coming off the upright and into the net after just four minutes.

As if that wasn't enough, Chiefs forward Leonardo Castro was given his marching orders just 16 minutes into the match for a horrible challenge on Trevor Mathiane.

To their credit, Chiefs weren't deterred despite playing with ten men. They signalled their intentions that they were not going to give up without a fight when George Maluleka's cross fell kindly for Bernard Parker, who headed wide soon after Castro had been sent off.

The next time Parker was in a scoring position, Arrows were made to pay. With a minute to go before the break, Parker found space and chipped the ball over the onrushing Maximilian Mbaeza. It was the 32-year-old's 50th Chiefs goal since joining the club seven years ago.

Disappointing for the home fans who had been the most vocal for the better part of the first half, but they were joyful again just after the break when Lamola completed his brace.

Danny Venter delivered the cross and Lamola applied the finish. Chiefs were once again on the backfoot.

In an attempt to find the equaliser, Chiefs caretaker coach Patrick Mabedi rang the changes with a double substitution that saw Tsepo Masilela and Bernard Parker make way for Philani Zulu and Dumisani Zuma respectively with about with about 20 minutes remaining.

But it was Arrows who had the last say with Ndwandwe getting the third for the hosts for a sweet revenge after Chiefs eliminated them with a 3-0 scoreline in the Nedbank Cup at FNB Stadium back in February.