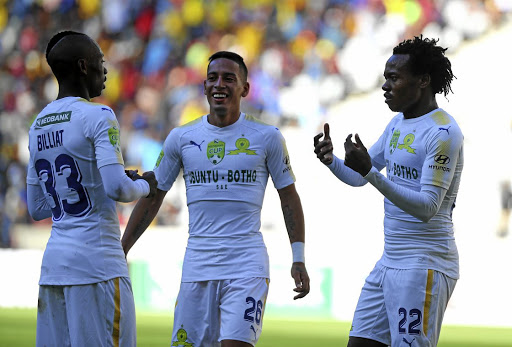 Mamelodi Sundowns coach Pitso Mosimane has reiterated the importance of striker Khama Billiat as his team looks to overcome plucky opponents in their remaining league games.

The Brazilians have six games left in the league against gritty teams as they chase their eighth title.

Billiat - who could leave the club at the end of the season, when his contract expires - delivered a superb performance to steer the team to a 2-0 triumph over Chippa United in midweek.

The 27-year-old Zimbabwean ace grabbed the second goal after his partner in crime Percy Tau scored the opener.

Mosimane said: "Khama has got experience and he scores. I sacrificed Themba Zwane but at this point I need the goals. It's a sacrifice for the team.

"Jeremy Brockie also wants to play, but the way it's going up front with the two [Billiat and Tau], you must leave it.

"Khama came back and is scoring. Percy also is scoring. It's always good for the team when the three up front are sharing goals like that."

Sundowns remained top of the table and moved to 46 points, while Orlando Pirates are still a point behind.

Mosimane has urged his players to grind out a result again against Baroka at the Peter Mokaba Stadium on Sunday (3pm).

He spoke of his reverence for their next opponents and their in-form winger, Talent Chawapiwa.

"That boy Talent, he takes everybody on, he is a very difficult player to manage. They are a good team. They do not park the bus, they come at you. Probably it might suit us but we need to respect them."