Platinum Stars' sale is dodgy from all angles 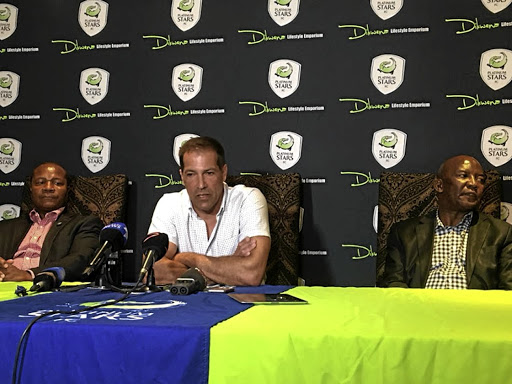 Former Platinum Stars' chairman Cliff Ramoroa, current head coach Roger de Sa and Kgosana Rapetsana at last week's announcement that the club has been bought for R22.5-m, which the writer says is far lower than what was paid for other clubs./Platinum Stars Twitter

Whichever way you look at it, the transaction which confirmed the sale of Platinum Stars last week looks dubious.

First of all, the new investors into the North West side surely could not believe their luck when they got to pay just R22.5-million for an Absa Premiership club. It's a steal, considering what others were said to have paid in recent years to acquire top-flight teams.

In 2016, Mpumalanga Black Aces sold their status to John Comitis for a reported R80-million. And, last year, AmaZulu bought their way back into the top division after apparently paying around R50-million to take over promoted Thanda Royal Zulu's place in the Premiership.

The R22.5-million that a consortium, led by Rawat Petroleum, is now said to have paid for Stars seems illogical. Even if you consider Dikwena's lowly log position - they could be relegated in a matter of two months - what was paid to acquire them from the Bafokeng nation is ridiculously below the market.

A few years ago, Stars were in such great form that they could easily have made more than R22.5-million in a year.

They won back-to-back trophies in 2013 - the MTN8 and the Telkom Knockout - raking in a combined R12-million in prize money.

Add the monthly R1.5-million grant from the PSL over 10 months, then you have surpassed this pathetic selling price that Stars apparently put on themselves by
R5-million. It smells dodgy in the extreme.

Another curious aspect of this transaction is the case of money laundering and corruption as confirmed by the Hawks against certain people involved with the club, either now or previously.

It's alleged some people helped themselves to the club's coffers, undervaluing players on sale and overstating salaries in some cases, while at the same time diverting funds which were meant for the club to their own accounts.

The Hawks have confirmed they are investigating all these allegations, with possible arrests imminent.

They might as well add this latest sale of the club. It makes little sense why, when apparently there had been an offer of around
R33-million - as alleged by community members who attended last week's announcement in Phokeng - Stars instead were sold for far less.

Stars coach Roger de Sa is an affable, accessible man of integrity. But that he led negotiations with the Stars management on behalf of Rawat Petroleum just doesn't sound right. It's akin to being a referee and a player at the same time.

He could not have been unbiased in the talks, as he will have been fully aware of day-to-day challenges of the club.

That he insisted the Rawat Petroleum investors are "private people who don't want to be known" makes this whole deal even more shady.

If the PSL is serious about corporate governance and projecting the right image, it would institute a proper investigation into Stars' sale, parallel to the Hawks inquiry into the shenanigans at the club.