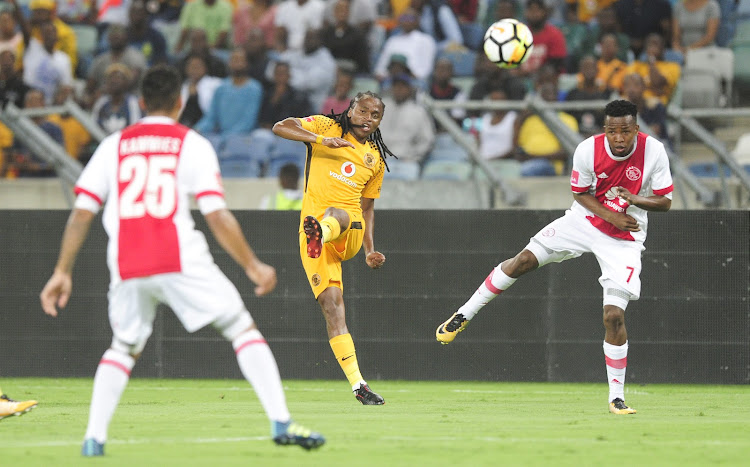 Dumisani Zuma’s first goal for new club Kaizer Chiefs could not have come at a more important juncture, scored five minutes from the end of their last game of the year to beat Ajax Cape Town at the Moses Mabhida Stadium in Durban and send the AmaKhosi faithful off for their holidays with a decent dose of Christmas cheer.

The late strike pushed Chiefs into second place in the Premier Soccer League standings, just above Free Stars on goal difference but well off the runaway leaders Mamelodi Sundowns.

But for coach Steve Komphela it comes as a much-needed boost with 2018 offering the chance to turn things around, especially after the pre-match news of the signing of Leonardo Castro from Sundowns.

It was a deserved win and it might have been a bigger winning margin had Ajax goalkeeper Jody February not made two fine saves from Pule Eksteen and Zuma in the last stages of the game.

“It’s a nice Xmas present,” said Komphela, who looked more relieved than delighted with the success because Chiefs should have wrapped the game up much easier but were again wasteful in front of goal.

In the first half, Chiefs dominated their youthful opponents in all departments with Pule Eksteen, Bernard Parker and Siphiwe Tshabalala moving the ball around with great efficiency but not providing the finishing touch.

The pace of Chiefs caused all sorts of problems for a jittery Ajax defence who were hanging on for dear life, with some desperate defending keeping Steve Komphela’s men at bay.

Parker came closest in the first half with a shot across the face of the Ajax goal from a right angle that just nicked the outside of the post.

He was set up by Tshabalala, restored to the line-up after being left out last week against Platinum Stars only to come on and scored a late winner.

The visitors, who have won only one of their last 16 away games against Chiefs, had rare breaks with Thabo Mosadi and Innocent Nemukondeni dangerous on the wings but their square passes being easily cleared.

Parker had to go off with a hamstring injury early in the second half to be replaced by Gustavo Paez, who might have gotten onto the score sheet within five minutes of coming on but flashed his shot wide of goal from close range.

Khotso Malope, who had come on as an early substitute for the injured Philani Zulu, fired just wide with his effort in the 67th minute and a Tshabalala free kick some 10 minutes later was just missed by Teenage Hadebe, who had he got a touch would surely have steered it into the back of the net.

The Premier Soccer League has found Orlando Pirates guilty of “spectator misbehaviour” for their club’s role played in the pitch invasion that was ...
Sport
4 years ago

The Premier Soccer League want to throw the book at Cape Town City over the club signing a sports betting company as a shirt sponsor‚ and their ...
Sport
4 years ago

Midfielder Roland Putsche scored six minutes from time as Cape Town City beat AmaZulu 1-0 at home on Friday to move up into second place in the ...
Sport
4 years ago

Mamelodi Sundowns may be sitting pretty with their five-point buffer at the summit of the Premier Soccer League table with two games in hand but ...
Sport
4 years ago
Next Article