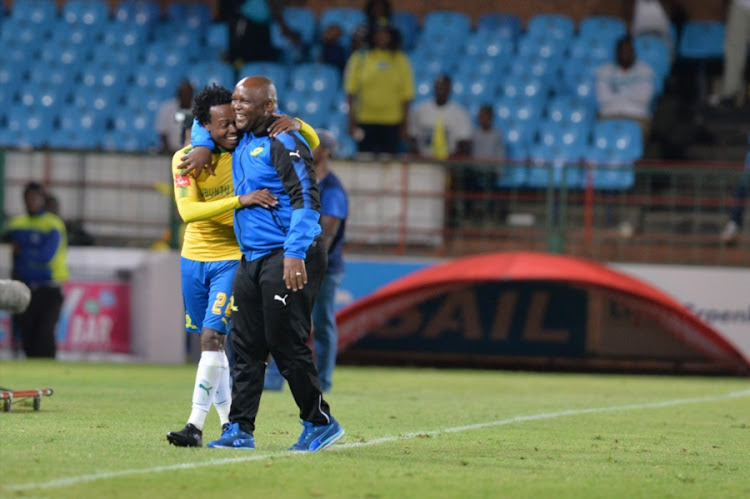 An inspired Percy Tau helped Mamelodi Sundowns open up a five-point lead at the top of the Premier Soccer League log with their 1-0 win over Maritzburg United.

Sundowns had to work hard for their eighth win of the season as a resolute and feisty Maritzburg side stood toe to toe with the hosts.

The visitors deserved a point for their tireless endeavours but Sundowns weren't in a generous mood.

The warm embrace Tau received from coach Pitso Mosimane said everything about the twinkle-toed forward's importance in the Sundowns set-up.

Maritzburg United looked every bit the team that has scored seven goals in their last two matches.

They had the pace and verve to worry the Sundowns defence and it came as no surprise when Lebohang Maboe stung Denis Onyango's palms in the 16th minute. There also was a 13th minute Siphesihle Ndlovu foray that had Sundowns' defence on edge.

Unlike most teams that have stage fright when they face Sundowns, Fadlu Davids's charges fancied their chances.

The “Team of Choice” also put numbers behind the ball when Sundowns went forward. There was a plan to frustrate Sundowns and in the first 20 minutes, that worked.

However, Sundowns' latent and apparent quality meant they were bound to ask difficult questions Within a frenzied two minute period before the half-hour mark, they should have scored. 28th minute attempts from livewires Tau and Themba Zwane were blocked and went wide respectively. Sibusiso Vilakazi's wastefulness was noted when he tried to dribble through Maritzburg's defence a minute later.

The final pass seemingly eluded Sundowns as Tau overran a through ball in the 36th minute but Kekana's trademark long range shots forced an excellent save from Richard Ofori two minutes later.

The troublesome Evans Rusike and Pogiso Sanoka had shots blocked by desperate defenders towards the end of the first half as the visitors regained a semblance of control.

Rusike wasted a golden opportunity to put Maritzburg ahead five minutes after the break when he tried to dribble past Onyango instead of blasting a shot past him after latching onto a stray pass from Sundowns left-back Teboho Langerman.

Maritzburg never looked like giving up and were unfortunate to have a potential Sanoka goal flagged for offsides in the 85th minute.

Substitute Andrea Fileccia had also failed to connect with a Maboe cross three minutes earlier as the visitors laid siege to Sundowns' goal. With Mosimane throwing on two defenders in the last five minutes, the lead was defended.