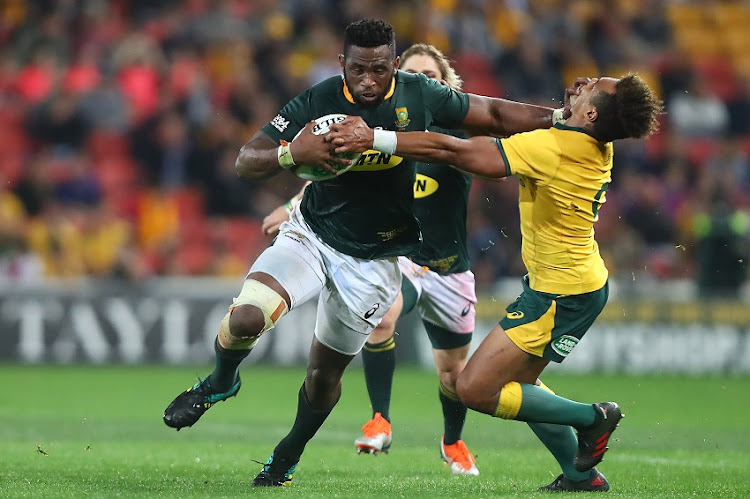 Siya Kolisi of the Springboks breaks through a tackle by Will Genia of the Wallabies during The Rugby Championship match between the Australian Wallabies and the South Africa Springboks at Suncorp Stadium on September 8, 2018 in Brisbane, Australia.
Image: Chris Hyde/Getty Images

Springboks coach Rassie Erasmus has confirmed that captain Siya Kolisi will make a return to the side from the bench in the warm-up match against Argentina at Loftus on Saturday.

Kolisi‚ who has been out of action for about six weeks with a knee injury that ruled him out of the Rugby Championship‚ made a comeback for Western Province in their Currie Cup win over the Pumas at the weekend.

“We seldom fast track a guy into Test match rugby but he is one of the guys who we desperately want to have involved in preparations for the World Cup‚” said Erasmus Monday after returning from Argentina where they sealed the Rugby Championship on Saturday night.

“He came through the game without any injury or showing any signs of the injury. We will probably involve him this weekend but it will be limited minutes because you can’t just throw him into a game like that.

"I am not sure what kind of team Argentina is sending but they will send a strong team. We will involve him slowly because we don’t want to rush him back. We have some time to slowly build him back into the team environment. He will play this weekend‚ maybe limited amount of time just to make sure that he is back to his fitness.”

While Erasmus welcomes Kolisi back‚ the bad news is that the influential Warren Whiteley is more than likely to miss the World Cup as he is yet to prove his fitness after an injury-ravaged season.

“He will struggle to make the World Cup squad because of his injury‚" the Bok coach said.

"He has suffered setback after setback and he is in a race against time. He is really a good player but he has been injured and with no game time for about six weeks‚ you can’t take a player who has been out for that long to the World Cup.

"We will have clarity in the next five days.”

“There are other guys who are in a race against time like Damian Willemse‚" he said.

"I think he played a few minutes for Western Province the past weekend. Aphiwe Dyantyi looks like he can only play next week and Wilco Louw has been playing.

"This weekend we will mix and match a little bit but we will put a strong team like we did against New Zealand because we want to keep the momentum before we go away.

“Officially‚ the squad will be announced on 26 August but internally every single player knows what they must do to be in the squad. Some are on the fringes and we are pretty sure where we are.”