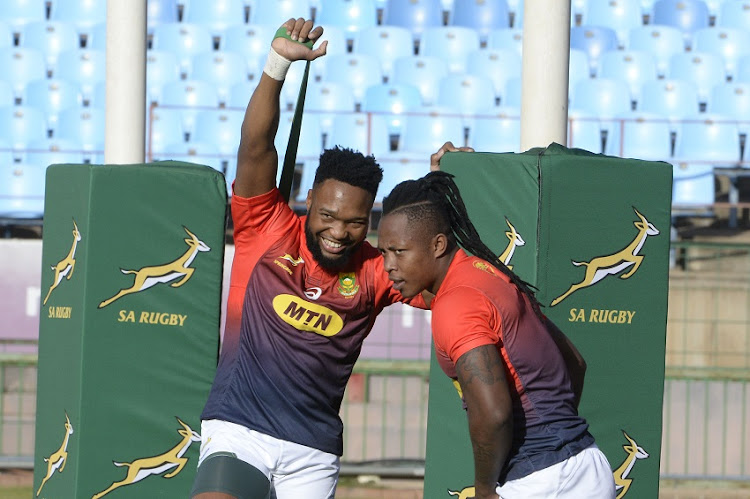 Springbok centre Lukhanyo Am and assistant coach Mzwandile Stick steadfastly stuck to the pre-arranged script of ‘building momentum’ to the World Cup days before facing the Pumas in Salta.

With the Rugby Championship title theirs to win‚ the Springboks have downplayed talk of taking their first meaningful silverware in a decade and instead focused on the long-term goal of World Cup success.

The World Cup obviously remains a priority‚ but a lean international trophy cabinet at SA Rugby headquarters could do with some filling. The Nelson Mandela Plate for beating Australia is just not enough anymore.

The Boks thrashed the Wallabies 35-17 at Ellis Park last month and then forced a dramatic 16-16 draw against the All Blacks a week later.

That put them one point clear of New Zealand in the race for the title and crucially‚ puts the destiny of the Rugby Championship crown in their hands regardless of what the All Blacks do to the Wallabies earlier on Saturday.

“Playing away in Argentina is always a tough game and we have prepared based on what we have seen in the previous two Tests‚” Am said.

“It is a great opportunity for us to win the Championship. But we do not want to look too much into it.

"It is another Test that we are looking to build on. The big picture is the World Cup.

“There is pressure in every Test that we play and going into this game we know there is a chance of winning the Championship.

"But if there is pressure‚ it is only positive pressure.

“The Argentinian side is quite a physical side. They are a team that keeps possession quite a lot.

"They link up well between their forwards and backs. It will be an exciting game for us to encounter in terms of playing against Argentina at their home ground.”

The Pumas have lost both Rugby Championship matches but ran the All Blacks close in Buenos Aires in round one.

Losing 20-16 at home was a disappointment for Argentina‚ especially against an experimental All Black unit.

Beating the Boks would be a massive boost for the Pumas before the World Cup.

After the Jaguares’ superb run to the 2019 Super Rugby final‚ some of the confidence and momentum gained from that campaign has dissipated after two Rugby Championship defeats for essentially the same team.

But that also makes them particularly dangerous‚ a fact Stick noted.

“They are a very‚ very good side. If you look at their team‚ they have got a good balance. Their backs compliment their forwards in the way they play.

‘They are physical in the midfield. If you look at centre Jeronimo De La Fuente‚ he is one of the best and has been playing very well.

"An experienced guy like flyhalf Nicolas Sanchez also controls the game well. It is really going to be tough‚ especially as their forwards are very physical.

“Playing in Argentina is another challenge. We know they are passionate about what they do and representing their country. We know the emotions behind the team playing at home.”

The Boks will name their team to face the Pumas on Wednesday evening (SA time).