Vincent Tshituka is ready for the Hurricanes 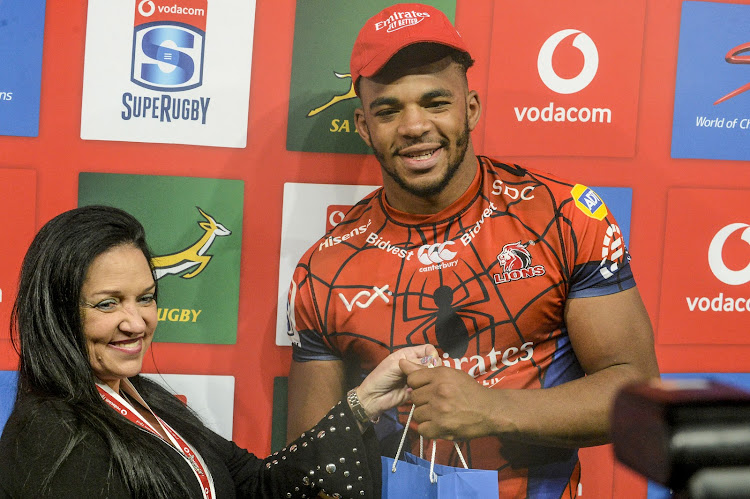 Vincent Tshituka of the Lions is Man of the Match during the Super Rugby match between Emirates Lions and DHL Stormers at Emirates Airline Park on June 01, 2019 in Johannesburg, South Africa.
Image: Sydney Seshibedi/Gallo Images

The years leading up to matric schooled him in it.

Having taken up rugby at the less steeped Northcliff High School‚ Tshituka has forever had to go up against players and teams with reputations that precede them.

That’s why he is ready for the redoubtable Hurricanes who travel to Ellis Park on Saturday.

“I’m actually excited‚” enthused Tshituka about the prospect of going up against All Blacks backrower Ardie Savea.

“Every time I go up against (big) names I want to see how I go. I’ve always been up against it my entire life coming from a small school.

“I have always lived up to the expectation so I don’t see why I wouldn’t this weekend if I’m selected to play‚” he said a little belligerently.

Tshituka‚ who only converted to rugby at high school‚ was more interested in soccer.

“The primary school I was at had soccer and that is what I was interested in and thought my future would be. I was a goal keeper and really enjoyed that‚” said the long time fans of Itumaleng Khune.

It has been a quick change of fortunes for Tshituka who debuted earlier this season before yielding to an ankle injury. He has played like a man possessed since his return.

He has reason to walk chest out this week after picking up the man of the match award against the Stormers last weekend.

“I have always believed in my ability. I’ve never over hyped myself. A lot of players do that.

"I always feel I’m ready to play. If I feel I’m not ready I’ll work on what I need to.

“Mentally though‚ I’m always present. That is what I love about myself‚ I always do my boss.”

His strong performance against the Stormers was recognised by the crowd who gave him‚ and others who departed the scene early‚ rapturous applause when they walked off.

“It was definitely the most love and appreciation I got from the fans.

"It is easier to judge people by performance. I have given them something to appreciate. I could feel that love and appreciation.”

He has shone of late in a Lions team that have generally played with more assurance on home soil in the second half of the campaign.

“We were always transitioning‚” he said about the team and their earlier defeats on tour and in conference play.

“We were building from the word go. I don’t think we took a dip. We might have been stagnant for a while.

"Every game that goes by we grow more confident in each other and the team. We understand each other more.”

His form has given rise to speculation about where he might feature in the national scheme of things post World Cup.

“That is not something I thought about. I’m more concentrated on the immediate games and goals. I haven’t really looked into that.”