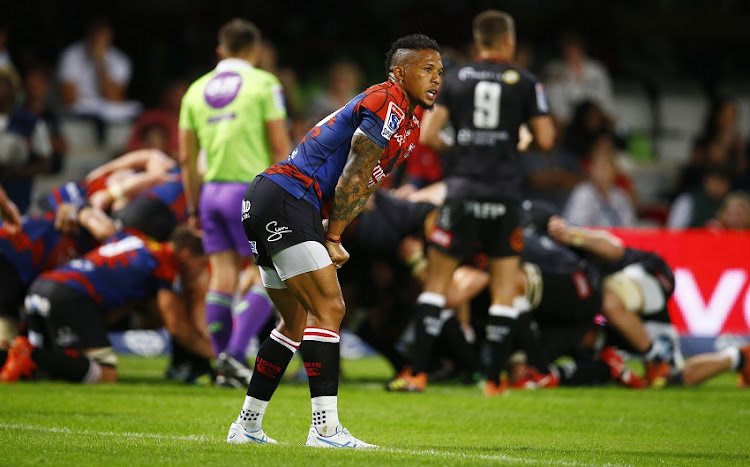 Elton Jantjies of the Emirates Lions during the Super Rugby match between Cell C Sharks and Emirates Lions at Jonsson Kings Park Stadium on May 25, 2019 in Durban, South Africa.
Image: Steve Haag/Gallo Images

The Lions dropped a bombshell by leaving their match winning flyhalf Elton Jantjies out of their squad for their crunch Super Rugby game against the Stormers at Ellis Park on Saturday.

Jantjies has been dropped for “breaching team protocol” but the team was tight lipped about what got their pivot into a pickle.

There are suggestions that Jantjies’ infraction happened late night/early morning following last weekend’s clash against the Sharks in Durban.

There are also suggestions that the flyhalf didn’t follow team orders against the Sharks.

He also threw two errant passes that led to intercept tries for the hosts.

If he went on a nocturnal walkabout it would not be the first time Jantjies has fallen foul of team protocol.

“It is a team protocol matter and it is a great time for Shaun Reynolds to have a go‚” said coach Swys de Bruin who wouldn’t comment on whether Jantjies stepped out of line on or off the field.

“Ag‚ it is a private matter. It is something within the team and it is not the first time it happened. We carry on.”

He conceded that it was “a big decision” to leave Jantjies out‚ especially with the Lions’ qualification for the play-offs far from secure.

“It is not about the individual. It is about following the protocol‚” reiterated De Bruin.

Jantjies’ absence will no doubt have an impact on how the players usually around him go about their business against the Stormers.

“Shaun has been around for three‚ four years.

"When he plays in the SuperSport Challenge he plays very well. He knows the system.

"Elton has been a mentor to him. He understands the calls. He’ll do well‚” insisted De Bruin.

Jantjies’ fall from grace wasn’t the only setback to emerge from the Lions camp. De Bruin on Thursday confirmed that regular captain Warren Whiteley will be out for the rest of the Super Rugby campaign.

Whiteley who had kidney stones earlier this week has had a season punctuated by injury.

He missed a large chunk of the early season due to a pectoral muscle injury‚ while his progress was halted by a knee injury suffered against the Waratahs.

“I’m not sure when he’ll be back. He went in for a scope (on Wednesday) and I still need to talk to the doctor. He won’t play for the rest of the Super Rugby season‚” said De Bruin.

Marx was rested last week against the Sharks but he’s back in the starting line-up as is tighthead Carlu Sadie. Their restoration will give the Lions more grunt up front . Flank Vincent Tshituka also returns which means Cyle Brink moves from seven to six flank.