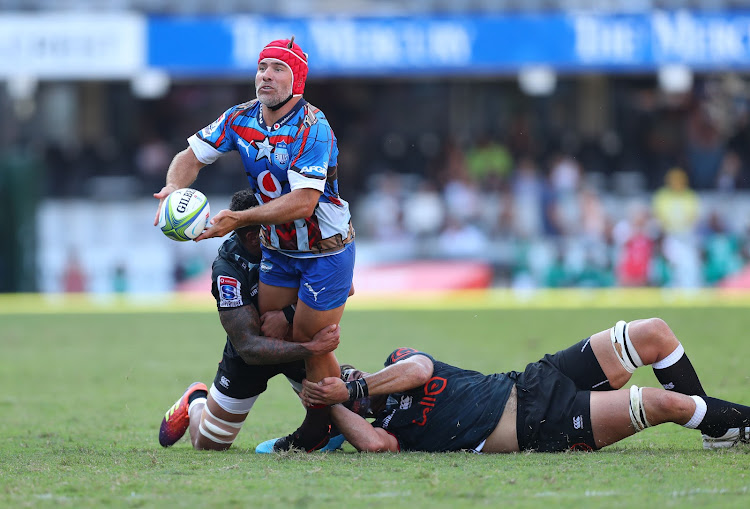 Schalk Brits releases a pass under a tackle from Luke Stringer and Ruben van Heerden of Cell C Sharks during a Super Rugby match against the Vodacom Bulls at Kingsmead Stadium in Durban on March 30 2019.
Image: Samuel Shivambu/BackpagePix

Last month‚ the 37 year-old veteran lost his appeal against a red card ban‚ which resulted in him missing four Super Rugby matches and he strongly believes that the process was not fair.

Speaking ahead of his comeback to the Bulls’ starting lineup against log-leaders the Crusaders at Loftus on Friday night‚ Brits urged that there be changes to how the rules are implemented going forward.

“I think going forward there need to be changes made as to how they apply rules‚” he said.

“Sometimes you feel that‚ ‘How can a guy in Australia get two weeks and a guy in South Africa get four weeks?’

“As a rugby player‚ I feel that we get the short end of the stick a lot of times in South Africa. I really think they need to reassess the process.”

Brits said it was not fair that he was given a full sentence because he has a prior offence that he committed more than four years ago.

“You are penalising me for a record that I got four years ago. Do I think that is fair? Maybe not‚ but it happened and I can’t do anything about it now.

“But I did ask them to have a proper look at it. Rugby is a fair game and if you look at the incident from beginning to the end‚ their outcome should not have been what it was – but I made peace with it quickly.

“They need to look at how they appoint solicitors or advocates and secondly the process itself.

“One of the things that I was unhappy about was that they thought I started the fight‚ but I was never in control of anything and I was never dominating.

“The point is that hopefully they will reassess. It has happened to me and I don’t care‚ it is for the next player because all I want is fairness.”

“I asked that‚ because it is a four-week ban with a break in-between‚ it is actually five weeks. I then asked if I can play a game on the week that the Bulls are off and they said‚ ‘No’.