The Lions retreat into the long grass 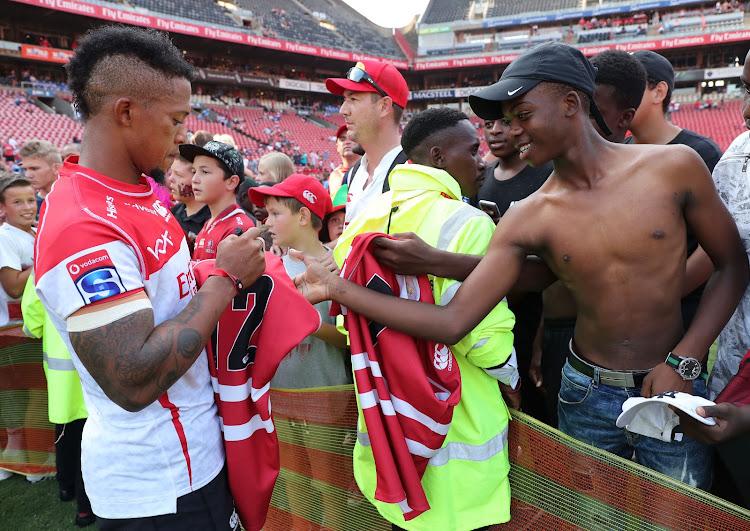 Elton Jantjies of the Emirates Lions signs autographs after the Super Rugby match against the Vodacom Bulls at Ellis Park Stadium in Johannesburg on March 2 2019.
Image: Gavin Barker/BackpagePix

Following consecutive conference defeats to the Stormers and the Bulls‚ the Lions have retreated into the long grass.

Swys de Bruin’s team‚ who are now bottom of the South African conference after three matches‚ have opted to maintain a low profile this week in the hope it will bring about the desired change in performance in Saturday’s Super Rugby clash against the Jaguares at Ellis Park.

They have curtailed their media obligations until Thursday in the hope that will bring sharper focus to their efforts this week.

Adopting the laager mentality‚ however‚ is unlikely to get them out of the rut they are currently in.

Their biggest concern is their sterile attack and the ease with which their opponents have shut them out.

While the Lions did exceptionally well to earn a first away win in Buenos Aires in the opening week of the tournament‚ their attack looked blunt‚ a theme that persisted in the defeats to the Stormers and the Bulls.

In Buenos Aires a greasy ball meant they had to adopt a measured approach in attack but their backs continued to underwhelm in the subsequent matches.

Flank Marnus Schoeman scored a hat trick in Argentina‚ prop Dylan Smith and No8 Warren Whiteley dotted down in Cape Town‚ while Smith was on the score sheet again against the Bulls along with fellow prop Carlu Sadie.

A backline player is yet to score a try for the Lions this season‚ which is quite a step back for the team that led the try scoring chart in the league stages last season.

“It is a big concern‚” coach De Bruin admitted when asked of the dearth of tries among the backs.

“The backs can only play as well as the go-forward ball they are getting. If the pack provides the platform‚ we can score the tries.

"It is not about who was good‚ the forwards or the backs. No-one was good. I wasn’t good. We didn’t play well‚” De Bruin said after their defeat to the Bulls.

De Bruin was also clear the team should not seek improvement by changes in personnel.

"You take it on the chin and move on‚ otherwise you shouldn’t be in sport.”

The Lions were bossed in the tight exchanges by the Bulls and they will need some bulk and mongrel against the Jaguares.

They are likely to restore fit again Marvin Orie to the second row after the lock missed out last week through injury.

Flank Cyle Brink‚ who suffered a serious knee injury last year‚ is on the cusp of making his return.

A return this week‚ however‚ may be a tad too soon but his reappearance in a Lions jersey won’t come a moment too soon.

Hooker Robbie Coetzee‚ who has also been a long-term casualty‚ should be ready in the coming weeks‚ but lock Lourens Erasmus will miss the entire campaign.