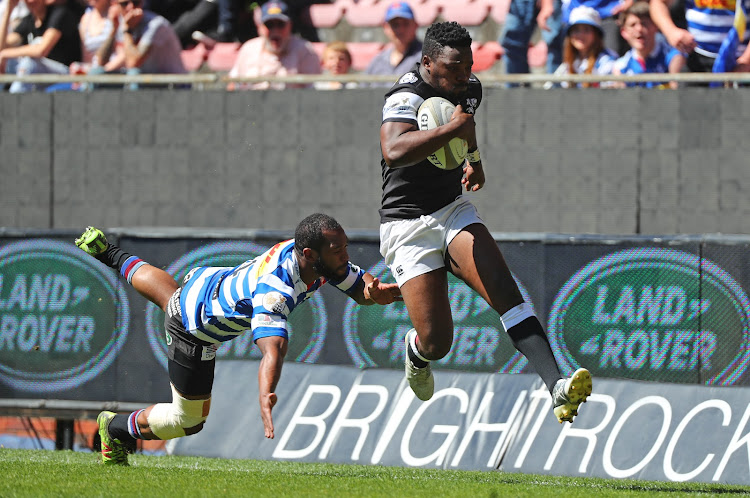 Lwazi Mvovo of the Sharks evades a challenge from Sergeal Petersen of Western Province during a Currie Cup match at Newlands Stadium in Cape Town on September 29, 2018.
Image: Chris Ricco/BackpagePix

Western Province shrugged off a poor start to remain the only unbeaten team in the Currie Cup and secure themselves a home semi-final by beating the Sharks 50-28 (halftime 31-21) at Newlands Stadium in Cape Town on Saturday.

This was a contest between the two best sides in the competition and they lived up to the billing. Barring a major upset, it was also a curtain-raiser for next month’s final at the same venue.

The Sharks blew several try-scoring chances with centre Marius Louw, who otherwise had an excellent outing, and scrumhalf Cameron Wright both knocking on with a clear run to the Western Province try line.

But Western Province deserved the win for their ability to turn pressure into points with better option-taking and fewer mistakes.

Province responded with little fuss and took control for the next 30 minutes with a staggering display of attacking rugby that left the Sharks reeling, but not completely beaten.

Four Province tries and a penalty followed Louw’s score to put the home team into a 31-7 lead and seemingly over Table Mountain and out of sight.

But the Sharks stayed in contact when they managed to secure some possession 10 minutes before the break and put pressure on the home team’s line.

A slew of Province penalties further added to the pressure and eventually the Sharks scored through flank Tyler Paul and after the halftime hooter through lock Gideon Koegelenberg.

It left them only 10 points adrift going into the break, which in the context of the match, was remarkable.

Province’s forwards had the edge with impressive No 8 Jaco Coetzee prominent in many attacking moves and tighthead prop Michael Kumbirai catching the eye with his work rate.

Coetzee was only in the fray after regular eighthman Juarno Augustus pulled out before kick-off with a calf strain that will sideline him for several weeks.

Western Province will hope that Augustus doesn’t miss the semi-final, but at least coach John Dobson will know that Coetzee is a more than able replacement.

This was always going to be a contest between the two best packs but it came down to the wide men on both sides providing the stardust in an entertaining game.

Marais contributed 20 points from six conversions, a try and a penalty.

Petersen’s try was a wonderful solo effort where he skinned Bosch on the outside while Leyds ran a lovely angle on to a Ernst van Rhyn pass for his score.

Bosch also gave a strong performance and constantly ghosted into space to create chances for hungry support staff such as Louw and No 8 Dan du Preez.

It was a match broken into segments of domination with the home team controlling the first half hour and the visitors the next 30 minutes.

In that second period of dominance, the Sharks came within three points of the lead when wing Aphalele Fassi scored five minutes into the second half and for a long time the Sharks looked the better team.

But they failed to make the most of the chances they created and Province were able to release the pressure valve when Marais crashed over with some help from lock Salmaan Moerat in the 65th minute.

Minutes later Marais intercepted and set wing JJ Engelbrecht free for WP’s sixth try and the score that settled the contest, and perhaps the venue of this year’s Currie Cup final.