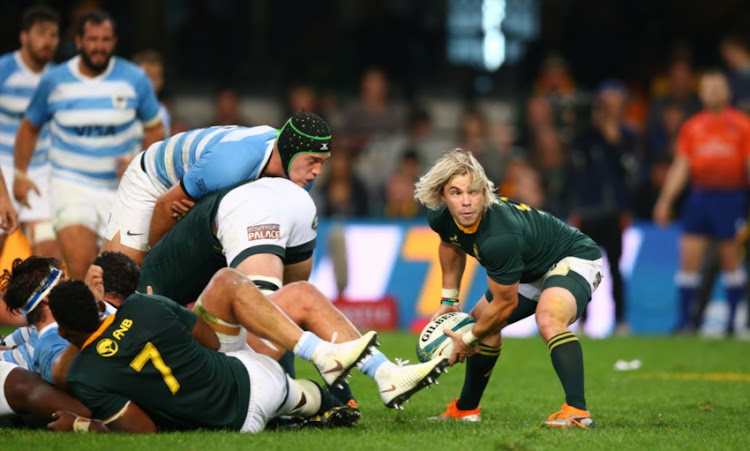 Pocket rocket scrumhalf Faf de Klerk has urged the Springboks to be cut-throat in the red zone and not to squander opportunities when they face Australia in Port Elizabeth on Saturday.

The diminutive No 9 made the call ahead of the Boks’ clash against a wounded Wallabies side which is expected to pull a capacity 46‚000 crowd to Nelson Mandela Bay Stadium.

De Klerk‚ with his trademark flowing blond hair and sniping runs‚ was one of the one of the stars when the Boks pulled off a sensational win over the All Blacks in their last game.

Now the scrumhalf wants his team to replicate that hunger for points against Australia.

“In our earlier games‚ which we lost against Australia and Argentina‚ we were creating opportunities‚ but not converting them into points‚” De Klerk said.

“That is partly due to experience and partly because of guys losing focus or not always having the right plan when it comes to converting points.

"We have spoken a lot about it. Every week we speak about our opportunities and how many we had.

“How many opportunities we had against Argentina was unheard of. But we did not convert them.

"Then‚ against Australia‚ there were so many tries we could have scored that we did not.

“The Boks must get used to being cut-throat when we have opportunities. If you get 10 chances and you finish seven that is great.

"But our conversion rate is not good.

"We are not playing bad rugby‚ we are just not getting over the tryline.”

De Klerk says he focuses on his own game when he comes up against top-rate scrumhalves like New Zealand’s Aaron Smith and Australia’s Will Genia.

“I just go out to play my game for the best of my team‚” he said.

“Players like Smith and Genia bring out the best in me in terms of how I want to play. As long as I can do something good for my team then I am happy.

"My main goals are to put forwards into space‚ to make quick ball and to do the basics right.

“In terms of rival scrumhalves‚ it is not often that you get in one another’s face. Maybe only at scrum time.

“Mostly you are involved with the other players. If you try to outplay your opposing No9 you will probably end up second best

“I shift the focus to my own game and what I can do. But you can learn from players like Genia and Smith by analysing how they want to play.

“So I try to learn something and use it against them. Those are things I take from playing against scrumhalves like them.”