Australia planning to single Aphiwe Dyantyi out for special treatment 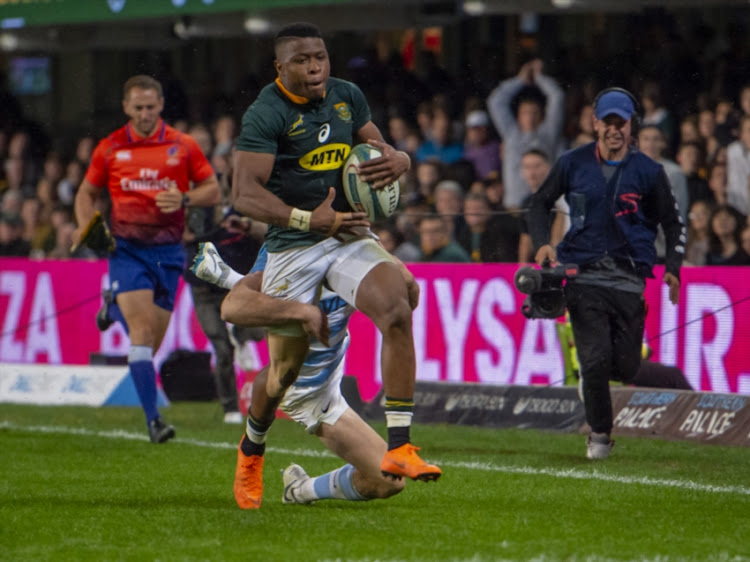 Aphiwe Dyantyi of South Africa on his way to score a try during the Rugby Championship match between South Africa and Argentina at Jonsson Kings Park on August 18, 2018 in Durban, South Africa.
Image: Gordon Arons/Gallo Images

Hot-stepping Springbok speedster Aphiwe Dyantyi will be a marked man when he faces the Wallabies in Port Elizabeth on Saturday‚ Australian wing Marika Koroibete said.

Dyantyi was one of the heroes when the Boks shocked the All Blacks and he can expect to be singled out for special treatment at Nelson Mandela Bay Stadium.

With a sellout 46‚000 crowd urging him forward on attack‚ Dyantyi will test a shaky Wallaby defence as the Boks hunt back-to-back Rugby Championship wins.

His two tries against the All Blacks earned him the man of the match award in Wellington‚ and his blistering pace caught the eye of Koroibete.

“This week we are going to work on something to stop him from scoring tries. He's a really exciting player for the Springboks.

“I played my first Test start here in South Africa and since then I have been in the starting line-up and playing more with the boys.

"It's given me confidence‚ knowing each other's game. The last couple of weeks have been tough but I'm going to play my best and do my best for the team."

It is 12 months since Koroibete put his name in lights with two tries against the Boks on his Australian debut.

Australian forward Ned Hanigan is expecting the Bok side that lines up this weekend to play more like they did in Wellington than the losing effort in Brisbane when the sides met earlier in the competition.

“They’ll just do exactly what they did leading into that All Blacks Test‚" he said.

“Beating that side is a hell of an achievement over there.

"They’ll know their processes leading into that week were right‚ so they’ll make sure they keep nailing that and we’ve obviously got to make a few changes.

The Wallabies slumped to their lowest world ranking (seventh) after their defeat to Argentina.

Since their arrival in South Africa there has been much soul-searching about what can be done with a troubled team that has managed just two wins in their last nine Tests.

Their alarming slide was reinforced by the 23-19 upset win by Argentina on the Gold Coast on Saturday.

It was the first victory for the Pumas on Australian soil in 35 years‚ which left the Wallabies last on the four-team Rugby Championship log.