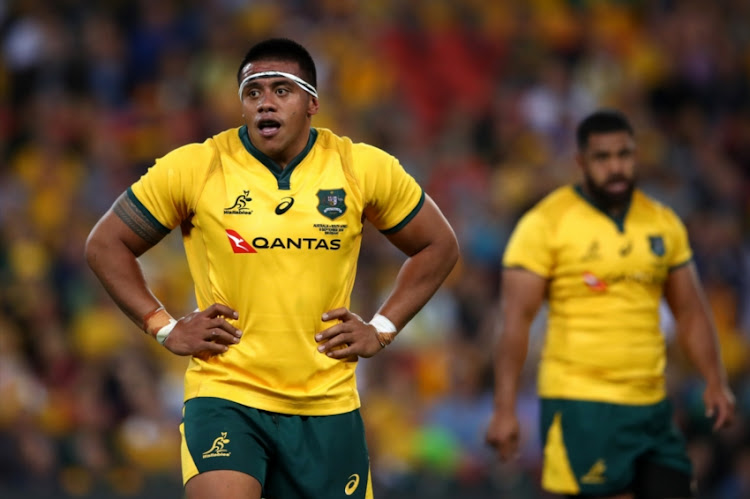 Allan Alaalatoa of the Wallabies looks on during The Rugby Championship match between the Australian Wallabies and the South Africa Springboks at Suncorp Stadium on September 8, 2018 in Brisbane, Australia.
Image: Cameron Spencer/Getty Images

Wallaby prop Allan Alaalatoa has been talking up his team’s chances ahead of their crunch Rugby Championship clash against the Springboks in Port Elizabeth on Saturday.

Australia came in for stinging criticism after their defeat against Argentina and they are relishing the chance to bond away from home in Port Elizabeth.

“Being away from Australia can be good for us‚” Alaalatoa said.

“It will give us a chance to connect a bit more. I’m sure this will bring us closer together.”

Three defeats in four games in this year’s southern hemisphere championship threatens them with last place in the four-nation competition.

“We know it will be only us once we are out there on the field and we will have just each other to draw on to push through the barrier. I think it’s a good time for us to be away on tour‚” Alaalatoa added.

“We’re heading towards that point where we are developing and really getting to know our game plan‚” he said.

Teammate Ned Hanigan‚ likely to be restored to the starting line-up for Saturday’s Test‚ said the 23-19 loss to Argentina on the Gold Coast was hurting his team.

“We’ve had a lot of hard conversations since the result against Argentina. You can’t leave what happened there behind completely‚” he said.

“There are some learnings that have come out of it. We can’t kick stones‚ we have got to grab the situation and turn things around.”

After Saturday’s game‚ Australia travel to Argentina to meet the Pumas in Salta on October 6.

Australia coach Michael Cheika may be set to end the Kurtley Beale flyhalf experiment and restore Bernard Foley to the number 10 shirt for Saturday’s clash.

Having started the tournament at inside centre‚ Beale replaced Foley as starting flyhalf for the tight win over the Springboks in Brisbane and remained in the pivotal position for the demoralising loss against Argentina in the Gold Coast.

While the promoted Matt Toomua impressed at inside centre‚ Beale was unconvincing in both matches‚ prompting local media to demand Foley take back the reins for Saturday’s match in Port Elizabeth.

With the Wallabies under fire after slipping to seventh in the world rankings‚ Cheika said he was ready to play “any combination”.

“It’s a matter of whether we want to build on the last two games and give those guys another opportunity‚” he said.

“Or do we throw Bernard back in there? I have a pretty solid idea of what I want to do but we will have to let it unfold.

“I don’t think Foley was dragging the chain or anything. That certainly wasn’t the reason behind making the change.

“We wanted to take a look at a different combination there and we will have a talk about it and see how they go together.”