Wallabies coach Cheika may need win against Boks to survive 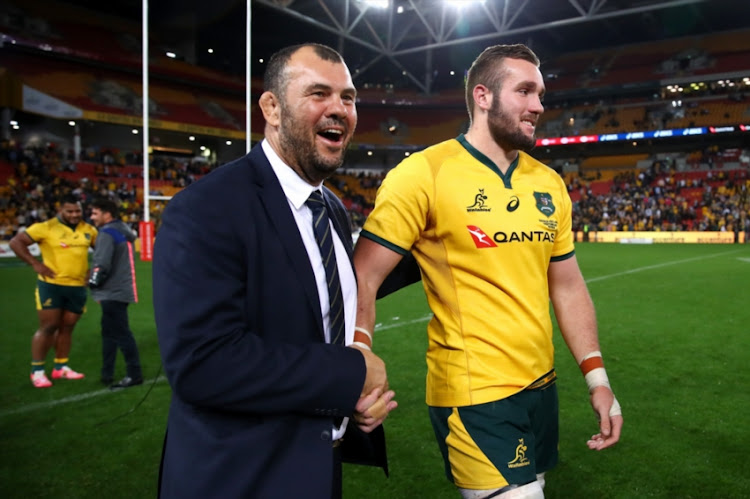 Izack Rodda of the Wallabies is congratulated by Wallabies coach Michael Cheika after winning The Rugby Championship match between the Australian Wallabies and the South Africa Springboks at Suncorp Stadium on September 8, 2018 in Brisbane, Australia.
Image: Cameron Spencer/Getty Images

Australia’s under-fire players will hold the fate of their coach‚ Michael Cheika‚ in their hands when they face the Springboks at Nelson Mandela Bay Stadium on Saturday.

If the Wallabies fail to register wins in their final Rugby Championship matches against the Springboks and Argentina‚ Cheika could be given his marching orders.

It will be an edgy Cheika who takes his seat in the coaching box in Port Elizabeth when his team run out to take on a resurgent Bok team who will enjoy the support of a sellout crowd of 46‚000.

The mood in Australia has soured after a defeat on home soil to Argentina that saw the Wallabies plummet to seventh in the world rankings.

There has been talk that an advisory role for the Wallabies’ most-capped captain‚ George Gregan‚ is on the cards to lift Australia out of the doldrums.

There have also been calls for an independent selector to be added to Cheika’s selection panel.

It is unlikely that Cheika will take much solace from the support that Rugby Australia boss Raelene Castle has given her head coach.

Castle did‚ however‚ hint that changes could be on the horizon if results weren’t quickly turned around after a disastrous 2018‚ where Cheika’s Wallabies have won just two of seven Tests.

“As I’ve said on the record before‚ he has the support of the board‚” Castle said after the loss to Argentina.

“Yes‚ we are facing some challenging times but he’s also doing some work with the environment he’s working in to make sure he’s got the best people around him and we’ll see the performances over the next couple of weeks.

“The results are important‚ there’s no doubt for the Rugby Championship‚ we’re looking to climb our way up the ladder‚” Castle said.

“What I can say is that I’ve spent a lot of time talking to Michael Hooper and Michael Cheika over the last week or so and no-one’s more disappointed with the results and certainly the loss to Argentina than they are.

“It’s been a good week off for them to regroup and now they have a week together building into South Africa.

“They’re excited about the opportunity. They’ve beaten South Africa once this year and they’d like to make it two.

“It’s important that we finish the Rugby Championship and see how we go there and then they’re home before they head off to Japan and the Spring Tour.”

Castle said no change would occur until after the Wallabies’ final match of the Rugby Championship against Argentina on October 7.