Five blows to Boks for games against Australia and New Zealand 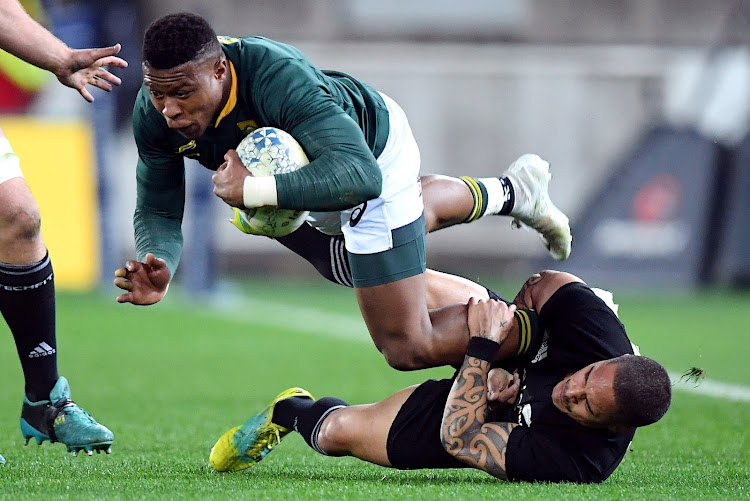 South Africa's Aphiwe Dyantyi is tackled by New Zealand's Aaron Smith on his way to scoring during a Rugby Championship match between the Springboks and New Zealand at Westpac Stadium in Wellington on September 15, 2018.
Image: REUTERS/Ross Setford

The Springboks will be without five key players for their final two Rugby Championship fixtures against Australia and New Zealand.

Centres Damian de Allende and Lukhanyo Am have been laid low with shoulder injuries while wing Makazole Mapimpi’s knee injury that ruled him out of last week’s Test against the All Blacks will keep him out of action for the home leg.

The good news is that Cheslin Kolbe has made a decent transition into test rugby and has played fullback at Super Rugby level while S’bu Nkosi will be making his return for the Sharks in the Currie Cup this weekend, thereby filling a spot at wing.

However, there’s a gap at outside which could ostensibly be filled by Jesse Kriel but that all depends on the full squad that will be announced by Erasmus on Saturday. Erasmus has announced a preliminary 17-man squad for the next two Tests.

There are a number of Springbok probables who will be on Currie Cup duty this weekend who will swell up the ranks after the action in Durban and Cape Town.

Erasmus said it was important for some players to get through their Currie Cup games because of a lack of match action for the Springboks.

“We are still keeping an eye on a number of players who we would like to involve in the coming weeks, but we would first like to see them get through their provincial matches this weekend,” Erasmus said.

“While we lost a couple of players to injury, we are looking forward to possibly welcome back some others who have been playing for their provinces and recovered from injury.

“The two home matches will give us more time to work together as a group, to build on continuity and increase our depth.”

Exactly one year from the start of Rugby World Cup 2019‚ Japan’s organisation is on track after early problems‚ which prompted a public rebuke from ...
Sport
3 years ago
Next Article