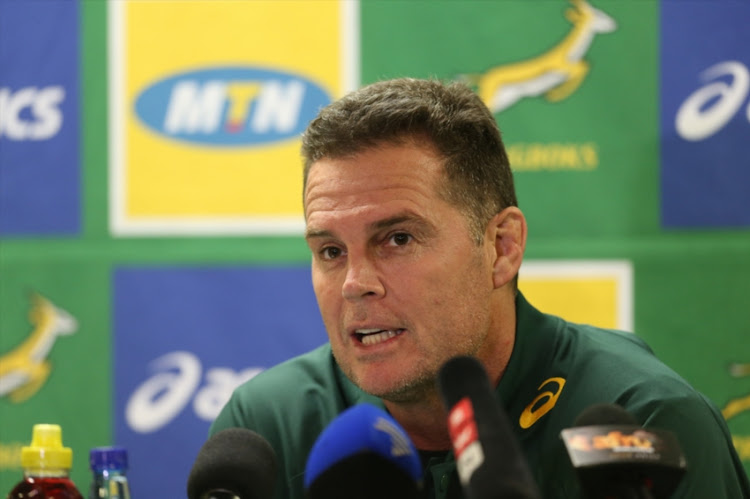 Springboks coach Rassie Erasmus has made several change to the starting line-up to face New Zealand in an early anticipated Rugby Championship showdown at Westpac Stadium on Saturday.

Erasmus named Handrè Pollard at flyhalf‚ switched Jesse Kriel to right wing and Lukhanyo AM to outside centre after announcing his team here on Thursday.

In other changes to the starting line-up‚ Malcolm Marx has replaced Bongi Mbonambi while Ross Cronje has taken the place of Embrose Papier among the substitutes.

Pollard’s elevation sees Elton Jantjies‚ who started against Australia‚ return to the bench.

#Springboks coach #RassieErasmus announces the squad to play against the #AllBlacks pic.twitter.com/HMjNfugYno

Kriel’s move to the wing was forced by the injury to Makazole Mapimpi who has returned home for treatment on his knee.

With Kriel moving to the wing‚ AM replaces him at outside centre in what is the only positional change in the squad.

Asked to explain his decisions‚ Erasmus said he leaned towards Pollard at No 10 because he wants him to bring physicality and direct play to the All Blacks after coach Steve Hansen included heavy hitters Jordie Barrett‚ Ryan Crotty‚ Rieko Ioane‚ Beuden Barrett‚ Aaron Smith‚ Sam Cane and Liam Squire.

“Elton can dictate the game very well but Handrè brings the physicality and direct play we need against the All Blacks‚" Erasmus said.

"We are trying to mix and match to see who can handle the pressure situations and it is not only with Handrè and Elton.

" It is the same with Malcolm (Marx) and Bongi (Mbonambi).

"I think this team is probably closest to the strongest fifteen we have put out there in the six matches we have played‚” he said.

In regards to moving Kriel and AM around‚ Erasmus said he has confidence in them because they have played in those positions before.

“We had two injuries to our wingers in Makazole Mapimpi and Sibisiso Nkosi‚" he said.

" We have a squad of 31 and we did not want to fly a guy who could have arrived here on Wednesday.

"Jesse has played there at the highest level‚ he knows the system very well and it was not a tough decision to make.

“Lukhyano is playing well at No 13 and I felt that it would be the least disruption.

"Cheslin Kolbe is a guy we could have considered to start but he has been with us for five or six days prior to the Test match and he will be better from the bench.”

Looking ahead to the clash‚ Erasmus said they have to make use of whatever opportunities come their way if they are to beat the All Blacks.

The Bok coach said he does not expect a physical battle similar to the two side's last meeting in Cape Town last year.

“The last one at Newlands last year was really close and everyone agrees that it was a physical battle‚" he said.

"But the way the All Blacks are playing at the moment‚ I don’t think it will be a physical battle because they play with finesse.

"They take small opportunities and they pounce.

"Against Argentina and Australia we created opportunities but threw them away.

"We will have to do much better in regards to putting ourselves in a position to win the match.”