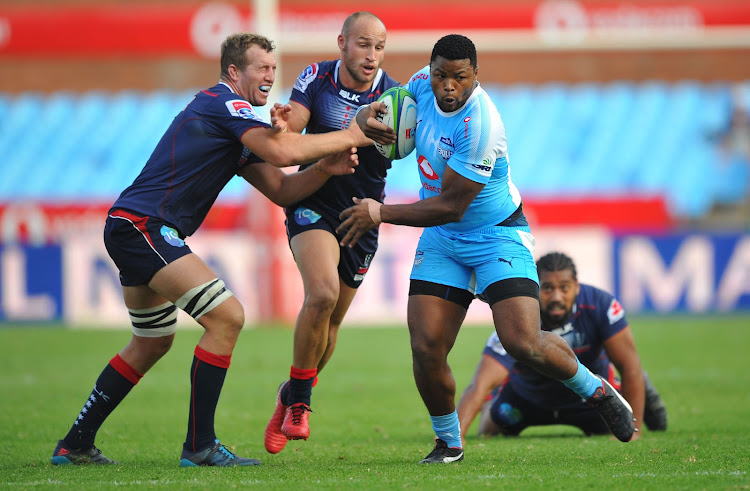 Lizo Gqoboka of the Vodacom Blue Bulls is tackled by Billy Meakes of Rebels during the Super Rugby match at Loftus Versfeld Stadium.
Image: Sydney Mahlangu/BackpagePix

After eye-catching performances off the bench this season‚ prop Lizo Gqoboka has been handed his first Super Rugby start by Bulls coach John Mitchell for the clash against the Highlanders at Loftus on Saturday afternoon.

A six-week ban to Pierre Schoeman has opened the opportunity for Gqoboka‚ who has come off the bench in all of the Bulls’ eight matches this season‚ to make an impression in the starting pack.

In other notable changes to the side‚ Jason Jenkins moves off the bench to flank in place of injured Roelof Smit in a change that will see a reshuffled loose trio.

Marco van Staden moves from the back of the scrum in his fetcher role‚ Thembelani Bholi moves into No 8 and Jenkins wears the No. 7 shirt for the first time.

Gqoboka’s place on the bench will be filled by Conrad van Vuuren‚ who is back from suspension‚ while Hendre Stassen comes in for Jenkins and could add to his two caps for the Bulls.

Embrose Papier is also back into the match-day squad at scrumhalf in place of Andre Warner‚ who took a knock against the Rebels.

Mitchell said he is keen to get to see how the team fares against the Highlanders.

“They have won four of their last five matches against us‚ so will have some confidence on how to approach this match‚” he said.

“They have delivered some strong performances as well during the year. That makes for a proper contest and a very good test on our progress. We are improving and that is nice‚ but we need to improve week by week.”

Captain Burger Odendaal‚ who leads the Bulls for the seventh time this season‚ insisted that the squad is growing in ability.

“We are getting things right more and more. There will always be room for improvement‚ but we made some encouraging steps in our progress to become the best we can be‚” Odendaal said.

“The Highlanders are playing great rugby and we cannot wait to go out there and test ourselves against them.”