Bok captaincy could be ‘bold’ as Rassie juggles squads 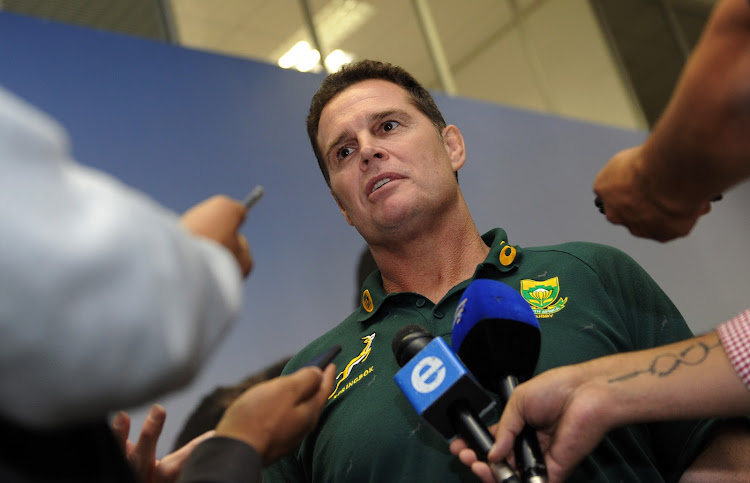 Springbok coach Rassie Erasmus is prepared to make a bold call on a new captain due to injuries to 2017 skippers Warren Whiteley and Eben Etzebeth.

Lions No 8 Whiteley‚ who captained the Boks twice against France last year‚ is struggling to shake a groin injury and won’t play for at least another three weeks.

The Stormers lock Etzebeth led the Boks 10 times in 2017‚ but hasn’t played since suffering a shoulder injury against Wales last November.

His recovery has been painfully slow with nerve damage complicating his rehabilitation. He is unlikely to play for the Stormers before the June Test window.

A potential leadership vacuum though‚ did not faze Erasmus for Tests against Wales and England in June.

“Injuries do affect the captaincy situation with both Warren and Eben out injured while other leaders such as Francois Louw and Duane Vermeulen are overseas‚” Erasmus said.

“Siya Kolisi [Stormers captain] is finding his feet in terms of form‚ so there are a few guys we are considering.

"The group will only be announced the week before the Wales Test [on May 26] so we will give it some time.

“Warren will be a strong contender but you can’t go into a Test match if you have only played 40 minutes of rugby.

“We are weighing up a few options there and we have four or five guys we could look at.

"But even if none of those guys are available‚ we might go with a young gun who has played a lot of rugby this season and is mature enough to handle it.

“We can’t just sit and wait until the senior‚ or more experienced players are ready. We might have to make a bold call there.”

Flyhalf Handré Pollard‚ who is only 24‚ springs to mind as a player with experience and a proven leadership track record‚ having captained the Junior Springboks and the Bulls already.

Erasmus also confirmed that he had been in touch with several overseas-based players about their potential availability for the Springboks.

With a tight turnaround between the Wales Test‚ which takes place in Washington DC on June 2‚ and the first Test against England at Ellis Park on June 9‚ Erasmus will employ two squads.

“I don’t think one Test is more or less important than another and we won’t be picking an ‘A’ side or a ‘B’ side. We will pick two equally strong teams‚” Erasmus said.

“You have to take into consideration that the week prior to the Wales match‚ the Sharks are playing the Jaguares away and will only get back to SA late on Saturday and we will gather on the Sunday.

“The plan is to travel to the USA late in the week so we can have a few days of training with a bigger squad of about 40 guys.

"We will be able to have sessions on Sunday‚ Monday and Tuesday and then the guys playing the game will go over.

“Then‚ when they return we will keep a big group and later cut it down to 30 or 31 players as per World Rugby regulations. It is a little bit of a juggling act with some mixing and matching.”