Blitzboks all on same page for Singapore 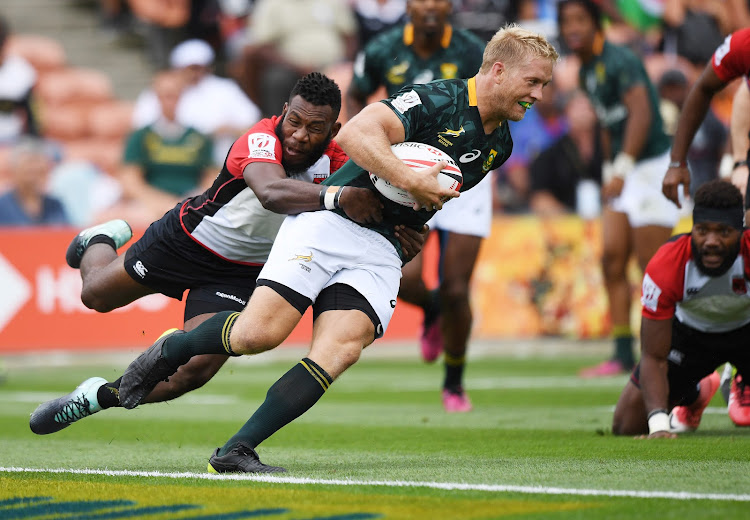 There has been a consistent theme drummed out by the Blitzboks in Singapore this week‚ where they are preparing for the eighth leg of the 2017/18 World Sevens Series – ‘focus and process’.

Coach Neil Powell believes the side veered from their usual script of staying in the moment at the recent Commonwealth Games.

Their lacklustre performance on the Gold Coast was put down to a team too fixated on outcomes rather than focused on the minutiae within a game.

By thinking of end results‚ the Blitzboks’ standards dropped as minds were not fully engaged with immediate tasks. Powell has been driving the message of ‘process’ home all week.

The players have taken up the script as they look to maintain and even build on their slender three-point lead over Fiji at the top of the standings.

“Follow the process and the result will look after itself‚” forward Dylan Sage said.

South Africa face Samoa in game one on Saturday followed by Canada and Argentina in Pool C.

“This is without doubt a very competitive series and teams such as Fiji and New Zealand are playing fantastic sevens at the moment‚” said Sage.

“We cannot look at them though‚ we have our own plans and focus in place. We have been successful when we focus on what we need to do and we will try and do so again this time around.”

Captain Kyle Brown was on script too: "We often said one game will not define us or what we stand for as a Springbok Sevens team‚ yet that second half performance against England in the Commonwealth Games in Gold Coast was one that did show some shortcomings in our attitude‚" said Brown.

"We were in fact defined by that one game as it also knocked us off the podium and we left Australia without a medal‚ disappointing many‚ including ourselves."

To help with sharpen minds and re-energise the squad Powell included six youngsters from the SA Sevens Academy in the squad for Singapore.

They did duty in round seven in Hong Kong and earned third – a superb result considering their inexperience.

"There can be no doubt that some of the new guys in the squad brought some energy and excitement and reminded some of the more established players what if felt like.

"It impacted on all of us‚” said Brown‚ now South Africa's second most experienced player ever.

"Good performances in Hong Kong were rewarded and those guys can again show what they are capable of.

"There is little sense in trying to shackle their energy and the way they play as that was what delivered them a medal in Hong Kong‚ so the senior heads in the team will provide the composure and sense of structure where needed.

“It was great for all of us to see one group in our system do so well and now we want to combine with them to deliver a good result in Singapore.”

The message from Blitzbok coach Neil Powell to a squad split evenly between the ‘second stringers’ from Hong Kong and the ‘first team’ who did duty ...
Sport
4 years ago

Blitzbok coach Neil Powell has challenged his squad to show the ‘joy’ of two weeks ago in Hong Kong‚ in the upcoming Singapore leg of the World ...
Sport
4 years ago

The callow Blitzbok side picked for Hong Kong leg of the HSBC World Sevens Series demonstrated impressive composure and skill to advance to the ...
Sport
4 years ago

Fiji coach Gareth Barber can smell blood in the water as his side look to close the gap on South Africa‚ and even overhaul them‚ at the top of the ...
Sport
4 years ago
Next Article