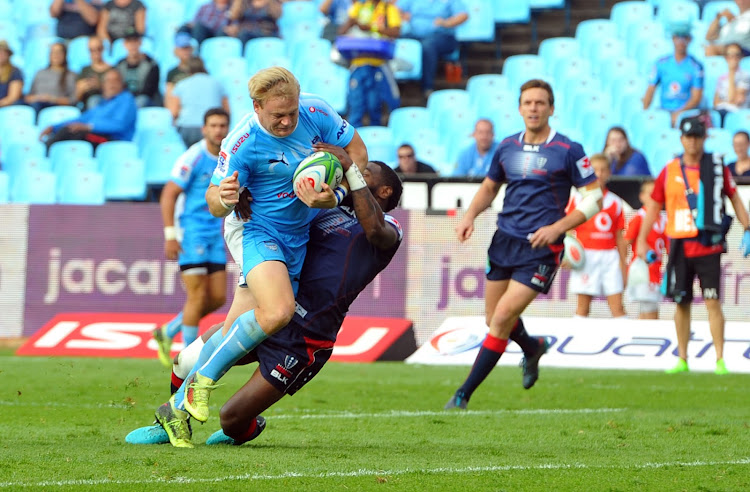 Adriaan Strauss of Bulls is tackled by Marika Koroibete of Rebels during the Super Rugby match between Bulls and Rebels 21 April 2018 at Loftus Versfeld Stadium.
Image: Sydney Mahlangu/BackpagePix

Bulls hooker Adriaan Strauss is open to the idea of coming out of retirement if coach Rassie Erasmus has a clear plan of how he is going to make a meaningful contribution to the Springboks.

Strauss‚ who retired at the end of 2016 while many thought he still had something to offer‚ has been in good form for the revitalised Bulls in Super Rugby this season under coach John Mitchell.

They are second on the South African Conference.

“I want to contribute in any way that I can and if that is possible then it is definitely something to look at‚" he said adding that he took a decision to retire two years ago seriously.

"For me‚ it must be worth it and I must be able to contribute to South African Rugby‚ the national team and it must be positive.

“It was a big decision to retire two years ago and I took it very seriously.

"So‚ to come back will also be a big decision and it will not be something you do for the sake of just doing it.

If Erasmus convinces him to come out of retirement‚ Strauss‚ who hold the record for most appearances for a South African in Super Rugby competition‚ will be used as back-up to the Lions’ Malcolm Marx with Bongi Mbonambi of the Stormers still out.

The fact that he is being linked with the Springboks at the age of 32 says a lot about his impressive performances this season for the Bulls in Super Rugby.

“We have really been working hard at the Bulls‚" he said.

"It started in the preseason already and I am enjoying my rugby again.

"I can play with a smile on my face and I am enjoying the company of the other guys around and I enjoy the game‚” he said as the Bulls prepared to host the Highlanders at Loftus on Saturday.

“I think the most important part was the break last year.

"I had the opportunity to work on the body a bit and I had a good preseason.

"I dropped a couple of kilograms after the back operation.

"I knew that I had to lose a couple of kilos just to keep up and spare my back.

"I think that helped wonders and also the mental break from the game.

“We can never get ahead of ourselves‚ we actually haven’t achieved anything.

We just won a couple of games now and we’ll use that confidence.

"We are more process driven and long term driven‚ working towards something and we’ll get stuck in the moment.

"I am happy about the wins and the one this past weekend but it is in the past now and we have started working hard for the next one.”