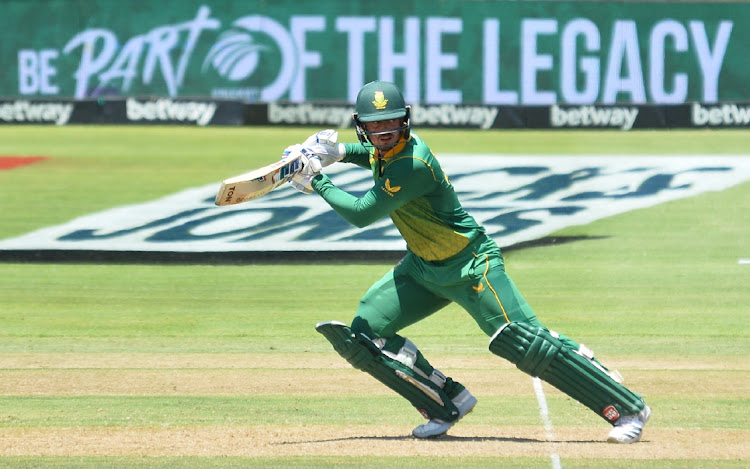 For most of their chase, India appeared destined for a white ball white wash but some ordinary bowling and some lusty hitting by Deepak Chahar turned the third ODI into a nail-biter.

India, however, fell four runs short as they were bowled out of 283 after SA, propelled by 124 from Quinton de Kock reached 287 earlier Sunday at Newlands Stadium.

Chahar was one of a raft of changes India made for the third ODI after they conceded the series with defeat in the second ODI in Paarl on Friday.

He strode to the crease with India's cause seemingly lost at 195/5 at the start of the 37th over.

Chahar, however, was undaunted and swung lustily proving particularly severe on Dwaine Pretorius and Lungi Ngidi.

His 54 off just 34 balls, which included five fours and two sixes, hauled India right back into contention in a match that by far exceeded its designated playing schedule.

While Chahar's boundary hitting got India back in the game it was his running between the wickets and marshalling of the tail that brought India tantalisingly close to victory.

By the time India needed just 10 runs off 18 balls they had a chance, especially if Chahar did not give his wicket away but he was bowled over off the first ball of the 48th over by Lungi Ngidi.

It required Pretorius pouch a swirling ball but the strapping all-rounder duly completed the catch, albeit stretched out.

Earlier captain KL Rahul, whose tour has gone downhill after his century on the opening day of the tour, again came up short when he nicked Ngidi early on.

If the dashing left hander felt he had unfinished business from his innings of 79 and 29 in Paarl, this would have been the perfect stage to remind of his immense prowess with the bat.

He's had 16 innings since he scored his last ton against Australia at the Oval in 2019.

SA were bowled out, albeit for a respectable 287 with a ball to spare, and would have felt they did not entirely deliver on their early promise.

However, just when he looked set his eyes lit up at the prospect of Andile Phehlukwayo running in from the Wynberg End.

Unable to get the bowler away, Dhawan took a swing across the line and sent the ball skyward for De Kock to complete the catch, it was an ordinary shot from a not-so ordinary player.

Phehlukwayo would have felt immense personal triumph and things got better when Rishabh Pant was also lulled into a false sense of security but unlike Dhawan, he reached deep into his repertoire having not troubled the scorers.

Former captain Virat Kohli has not been his fluent self on this tour but he has dug deep, he called on his vast experience rather than repertoire to advance India's cause.

Kohli again reached 50 but India needed more from their talisman.

He fell, curiously, for the third consecutive time to a catch from Temba Bavuma.

The SA innings were largely build around a 16th ODI century for De Kock, while Rassie van der Dussen contributed a typically effortless 52 off 59 deliveries.

Both batters have been vital to the SA cause with De Kock's last five innings yielding 429 runs at an average of 85.8.

His last century for the Proteas was against Ireland in Dublin last year.

He was also in fine touch in Paarl in the previous two ODIs scoring 27 and 78.

De Kock played with a bit more freedom on a faster pitch on Sunday and his ability to hit down the ground indicative of the difference in surface.

SA's wicketkeeper appeared to have the ball on a string and stuck his game plan.