Proteas too hot to handle for India 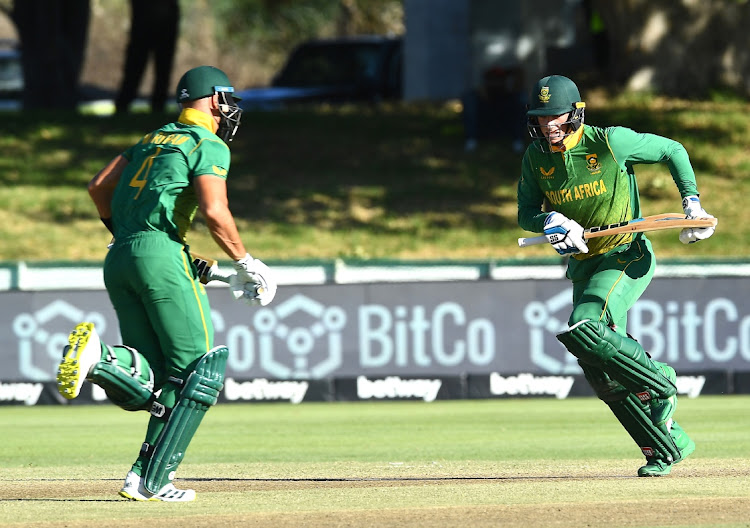 Rassie van der Dussen and Aiden Markram applied the finishing touches in the second ODI as SA surged to a series win over India in Paarl. They also won the Test series. The third and final ODI will be played at Newlands on Sunday.
Image: Ashley Vlotman/Gallo Images

SA continued their domination of India when they took an unassailable 2-0 lead in the ODI series at Boland Park on Friday.

It follows their 2-1 win in the Test series that concluded last week and is their first ODI series triumph since the 2019/20 season when they beat Australia.

Perhaps ironically, the team's success against India arrived at a time of great upheaval for coach Mark Boucher and potentially CSA's director of cricket Graeme Smith. Boucher's job is in the balance after CSA announced it will proceed with a disciplinary hearing in which it will test allegations of misconduct against the former international wicketkeeper.

While the coach's fate will be determined in the coming weeks, if not months, the Proteas on Friday seemed entirely unaffected by the behind the scenes drama as they again outplayed India in near boiling conditions.

They set about that task with alacrity, thanks largely to Quinton de Kock, while Janneman Malan provided further impetus in the middle of the innings.

De Kock looked in complete control from the outset. The wicketkeeper who returned to the ODI squad for the first time this week since announcing his retirement from Test cricket, timed the ball exquisitely, whether punching down the ground, or playing across the line.

De Kock who at times seduces with dazzling stroke play only to get out before building an innings of real substance, dug in this time.

He became more selective about the shots he played in anger. His 50 came off just 36 balls as SA went in relentless pursuit of India's total.

Meanwhile, at the other end, Malan, initially, struggled to get the ball off the square. His confidence, however, grew gradually but it was De Kock who put India on the back foot.

De Kock did offer a chance when he went down the wicket to Ravichandran Ashwin but Rishabh Pant couldn't gather the ball for a stumping with the ball hitting his shoulder. To add insult, De Kock spanked the next ball over square leg for six and soon after the opening stand reached 50 off 48 balls.

De Kock was in such control that his dismissal was met with a measure of disbelief. He somehow failed to get any bat on a full toss from Shardul Thakur and was adjudged lbw.

By then he had accumulated 78 off 66 balls with seven fours and two sixes. The damage was done as the opening stand produced 132 inside 22 overs.

Malan and Temba Bavuma continued in assured fashion. Malan dragged a Jasprit Bumrah delivery on to his stumps thus denying himself a fourth ODI ton in just 13 matches.

SA reached the total with just three wickets down and 11 balls to spare with Aiden Markram (37) and Rassie van der Dussen (37) at the crease.

Earlier India's innings was held together by the hard swinging Pant. His 85 came off 71 deliveries and included 10 fours and two sixes, some of which were struck with his bottom hand coming off the bat. He was particularly severe on Tabraiz Shamsi who had to be withdrawn from the attack.

Shamsi, however, had the last laugh as he had Pant caught in the deep and the bowler, a little churlishly, celebrated as if he had just won the World Cup. He did pat Pant on the back as the batter departed.

KL Rahul contributed 55 but India needed a player like former captain Virat Kohli to play an innings of enduring quality if they were going to set SA a total they could not chase down.

Kohli strode to the crease with the assurance and positive body language of a man in possession of the winning lottery numbers. It created the impression of a batter at the peak of his powers but while Kohli has made some decent recent ODI runs, he has been without a ton, the currency by which he is judged, in his last 17 innings.

Soon, however, his number was up, and so too that of India.

SA were on Friday set 288 to win the second ODI and the series against India at Boland Park.
Sport
4 months ago

South Africa captain Temba Bavuma said they are mulling over whether to select a specialist batsman or all-rounder at number six for the opening ...
Sport
4 months ago
Next Article