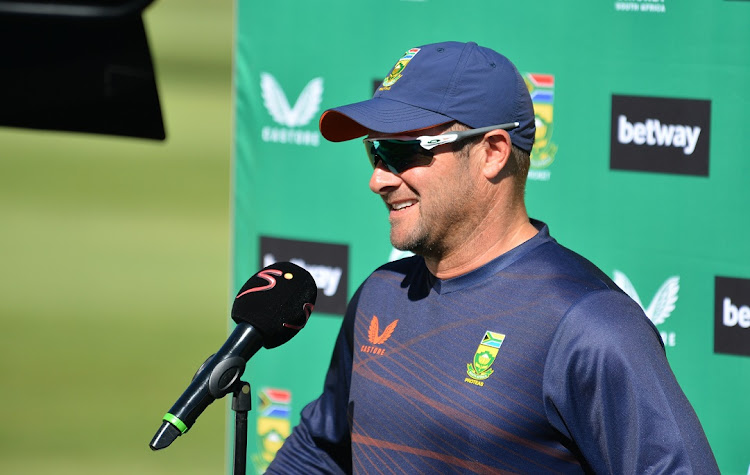 Cricket SA have pressed ahead with a disciplinary hearing against Proteas coach Mark Boucher.

This follows December’s Social Justice and Nation-Building (SJN) report, which made tentative findings regarding allegations of discrimination and racism against various characters in the sport, including Boucher.

To that end CSA has appointed advocate Terry Motau SC as chairperson of the disciplinary hearing to Test allegations of misconduct against the former Proteas wicketkeeper.

CSA proposed that the parties meet Motau on January 26 to determine a timetable for the proceedings.

The allegations against Boucher relate to testimony from his former teammate Paul Adams during the SJN hearings. Adams testified he was referred to as “brown shit” in a song performed by his Proteas teammates during his playing days.

In the wake of the hearings Boucher issued an apology via an affidavit to the ombudsman “for any real and perceived inappropriate behaviour by me”.

CSA said in a statement: “In releasing his report, the ombudsman, advocate Dumisa Ntsebeza SC, indicated that he was not in a position to make “definite findings” and recommended that a further process be undertaken in this regard.

“In keeping with this approach, the board was obligated to institute further formal enquiries into CSA employees, suppliers or contractors who are implicated by the SJN report, and this is the first of these processes.”

CSA board chair Lawson Naidoo added: “The board remains mindful of its duty to treat allegations of racism or discrimination with the utmost seriousness and in a manner that ensures fairness and due process in terms of SA’s constitution and labour legislation.

“It is now up to the inquiry to determine to which extent the allegations are true and justify the need for further disciplinary steps. CSA emphasises that any implicated party will be given a fair opportunity to be heard so that finality can be achieved,” said Naidoo.

CSA added that a charge sheet containing both the disciplinary charges against Boucher and his rights was made available to him on January 17. The upcoming inquiry will also consider concerns and allegations that arose after the resignation of former assistant coach Enoch Nkwe.

“While Mr Boucher is being charged with gross misconduct, which could lead to his dismissal, CSA emphasises it is important that the independent inquiry first needs to Test all allegations before any question of sanction can arise,” the statement continued.

“Further steps and action by CSA to transform cricket and act on other applicable recommendations in the SJN report, aligned to the board’s new strategic framework and pillars of access, inclusion and excellence, will be announced in due course.”

Boucher is engaged in the three-match ODI series against India, which could potentially be wrapped up by the Proteas if they win in Paarl on Friday.

The Proteas won the Test series 2-1 against India last week and went 1-0 up in the ODI series on Wednesday.

While CSA indicated it would decide on its course of action in relation to the allegations against Boucher this month, critics are likely to point to the timing of the latest release with the ODI series still in the balance.