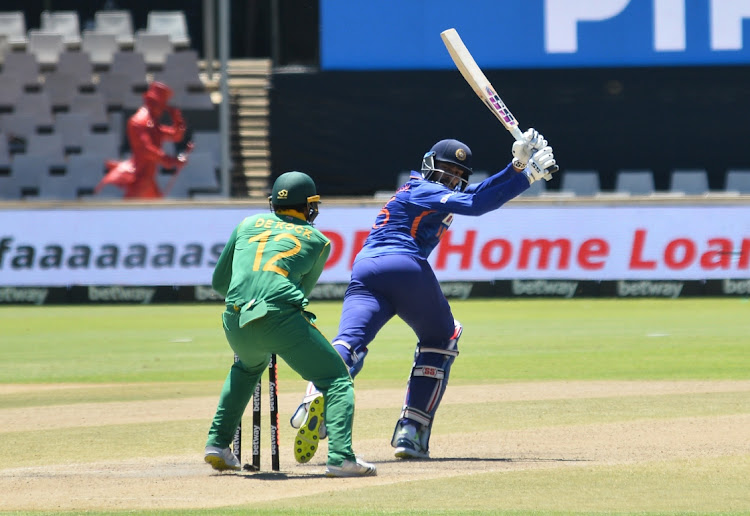 Smart work behind the stumps by SA's Quinton de Kock brought about the demise of India's Venkatesh Iyer in the second ODI at Boland Park on Friday.
Image: Grant Pitcher/Gallo Images/Getty Images

SA were set 288 to win the second ODI and the series against India at Boland Park on Friday.

India reached 287/6 after winning the toss in their stint at the crease in blazing heat.

Global warming denialists may be brought to a different persuasion if they spend an hour or so in Paarl on Friday. After playing in 37ºC heat on Wednesday, the mercury was set to rise to 39ºC on Friday and may partly have influenced India captain KL Rahul's decision to bat first.

Besides, SA had first use of the pitch on Wednesday and their 296/4 appeared out of the tourists' reach for almost the entire duration of the chase.

India's total was built on the back of lusty hitting from Rishabh Pant, who smashed 85 off 71 deliveries.

Rahul played cautiously for 55 off 79 deliveries, while Shardul Thakur, who helped himself to a half-century in a losing cause on Wednesday, again looked at ease on the low and slow surface. He chipped in with 40 off 38 balls.

SA opted to ease Marco Jansen's workload by resting him for this match. They could have done with his variation early on.

His absence was soon felt when his replacement, Sisanda Magala, took the new ball from the Nederburg End. Magala's first over in ODIs must have been thoroughly deflating for the barrel-chested seamer. He conceded 15 and his initial spell included some wides.

Shikhar Dhawan stroked the ball with familiar crispness and had effortlessly made it to 29 before he swept Aiden Markram to the square leg fence, only for Magala to gobble up the low-flying missile.

Virat Kohli's five-ball duck brought Pant to the crease and the stubby wicketkeeper raced to his 50 off 43 balls. He went along merrily with captain Rahul, who was far more circumspect in what he deemed boundary-hitting material.

The pair added 115 and India were well set on 179/2 before he fell to the retuning Magala.

Pant took a shining to Tabraiz Shamsi's offerings from the Nederburg End and bunted the similarly-proportioned left-armed unorthodox spinner down the ground, at times with impunity.

Shamsi was withdrawn from the attack but eventually got his man from the other end when Pant was caught in the deep, which led to unnecessarily boisterous celebration from the bowler.

After being carted around the ground initially, Shamsi recovered for figures of 2/57 off nine overs.

Cricket SA have pressed ahead with a disciplinary hearing against Proteas coach Mark Boucher.
Sport
3 months ago

There is nothing average about the way Rassie van der Dussen has taken to ODI cricket.
Sport
3 months ago
Next Article