Ngidi on quarantine: 'I actually enjoy it‚ works out pretty nicely for me' 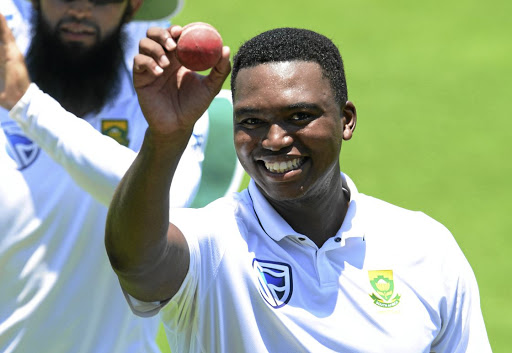 The Proteas' Lungi Ngidi says he gets a lot of work done on his bowling while confined to almost solitary confinement in quarantines.
Image: Gallo Images

While players and coaches alike pull their hair out and bounce off the walls in hotel rooms in frustration over quarantine‚ Proteas bowling star Lungi Ngidi can’t ask for a better way to prepare for a test match.

The 25-year-old Durban-born Ngidi is in the Caribbean with the South African team for a two-match test series and five Twenty20s and the first test starts on Thursday at the Daren Sammy Cricket Ground in St Lucia.

While some would be losing their minds and probably kicking everything next to them in their hotel rooms by the end of their quarantine periods‚ Ngidi has no such problems and walks out of it with his massive chest out.

“I actually really enjoy quarantine probably compared to a lot of people‚” said Ngidi after the Proteas had a practice session at the picturesque venue.

“I enjoy my own space and it is really where I can just focus on the work at hand which is pretty much what I enjoy.

"I actually get a lot of work done during quarantine and I enjoy it you know. I binge on series and when I get board I work out.

"It works out pretty nicely for me.”

Ngidi said he is enjoying his bowling at the moment and the heavily built fast bowler will hope to be in tip top shape when he steams in for the first test on Thursday.

“Yeah I have been working on a lot of different skills with Langers [bowling coach Charl Lengeveldt] and it seems to be paying off so I am really excited.”

West Indies coach Phil Simmons told the media that the wicket at the Daren Sammy Cricket Ground looks as though it will suit the seamers‚ which is a strength of both sides‚ and Ngidi agrees.

“The outfield has been very slow and that means batsmen are probably going to be running hard as bowlers I’m smiling about that.

“There’s also been a bit of bounce. It has been different from what people thought it was going to be.”

The visit is the Proteas' first bilateral tour to the Caribbean since 2010‚ barring a tri-series in 2016 that also featured Australia.

Ngidi said he is loving the surroundings.

“It’s been different; I’ve never been here before. It’s a beautiful country with wonderful people.”

The big fast bowler had been on and off the field due to injuries but said he has been working hard over the past couple of seasons to improve his fitness.

“To be honest it has paid off a lot. I have stayed on the park for a very long time now and that was my main goal.

“I just got to keep working through it and hopefully stay on the park for even longer.”

Ngidi is expected to come in first change with Anrich Nortje and Kagiso Rabada leading the fast bowling charge.