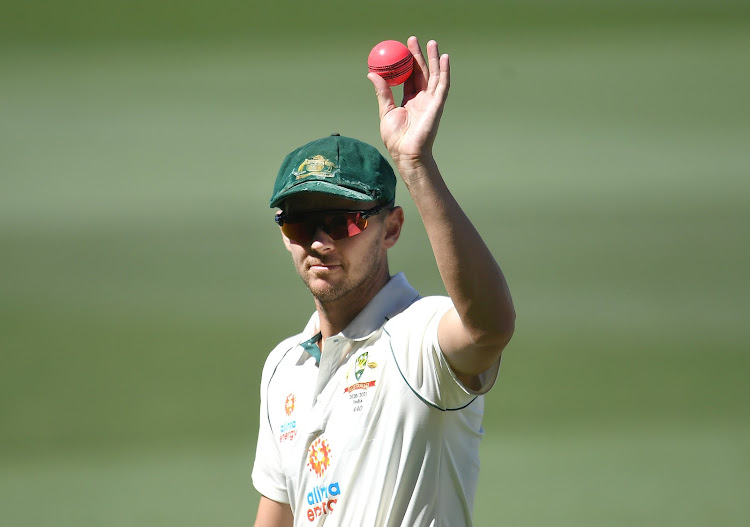 Australian bowler Josh Hazlewood shows the ball as he leaves the field after taking his five wickets.
Image: AAP Image/Dave Hunt via REUTERS

Paceman Josh Hazlewood offered no excuses for Australia's laboured display in the field on day three of the fourth test against India after the hosts' vaunted attack was humbled by Washington Sundar and Shardul Thakur's batting defiance.

In what could prove the defining partnership of the cricket series, debutant Sundar (62) and two-test tail-ender Thakur (67) combined for a majestic 123-run stand on Sunday that dragged India back into the contest on a steamy afternoon at the Gabba in Brisbane.

Chasing Australia's first innings 369, the unlikely pair's defiance helped India make 336 in reply after they had been reduced to 186 for six.

Hazlewood finished with a five-wicket haul, but there was little else for Australia to celebrate.

Their chances of winning the series - level at 1-1 - were diminished, and rain showers are forecast on the final two days.

Former players and pundits detected fatigue in the Australians, after the same frontline attack of Hazlewood, Mitchell Starc and Pat Cummins were thwarted by India's injury-hit batsmen on a taxing day five in the drawn Sydney test.

Hazlewood was having none of it.

"Everyone pulled up pretty well from Sydney," he told reporters.

"There’s a little bit of frustration there, obviously. Sometimes when you think (they’re) six down, you’re well on your way to knocking them over.

"We just let them off the hook there and probably didn’t build pressure the way we wanted to."

Australia had little impact from spinner Nathan Lyon (1-65), who has been warmly cheered by the crowd throughout his 100th test but given less respect by the Indian batsmen.

Lyon has only seven wickets for the series, having been Australia's leading bowler with 21 victims in the 2018/19 series Down Under, which India won 2-1.

Hazlewood defended the offspinner, saying there was little for him in the pitch.

"There’s a little bit of spin but not a great deal," he said.

"Obviously the Indian players are great players of spin as well and we’ve seen that throughout the series."