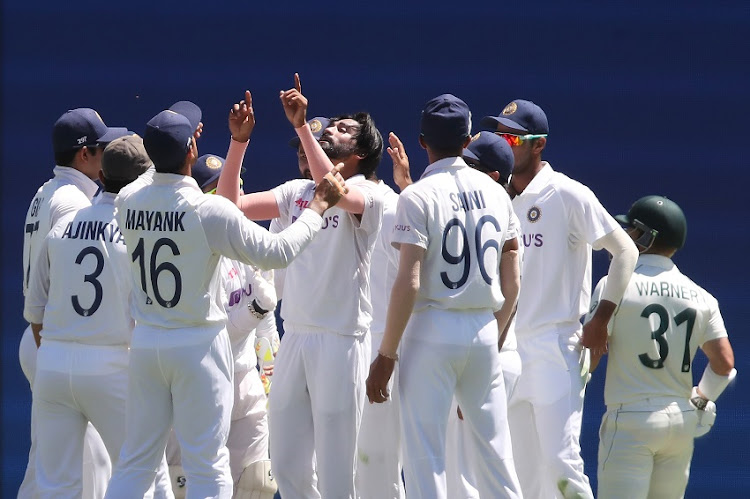 Mohammed Siraj of India celebrates dismissing David Warner of Australia during day one of the 4th Test Match in the series between Australia and India at The Gabba on January 15, 2021 in Brisbane, Australia.
Image: Jono Searle/Getty Images

A heavy downpour frustrated Australia on day two of the fourth test decider in Brisbane on Saturday, with play abandoned after tea and India spared from resuming on 62 for two in reply to the home side’s first innings 369.

India number three Cheteshwar Pujara was eight not out, with stand-in captain Ajinkya Rahane on two at the teabreak before a storm broke over the Gabba.

With more rain forecast over the remaining days, Australia may have little time to bowl India out twice and seal the series 2-1.

Home captain Tim Paine betrayed his displeasure in an animated discussion with the field umpires after they inspected the field and called off proceedings.

India, however, will have been more than happy to turn in early.

The tourists only need to draw the test to retain the Border-Gavaskar Trophy, two years after their breakthrough 2-1 series win in Australia in 2018/19.

To emerge with a tied series would be a massive achievement for Rahane’s side, which has battled a mounting injury toll throughout and lacked a single first-choice bowler to call on in Brisbane.

Australia, thwarted by India’s wounded batsmen in the drawn test in Sydney, are likely to ponder another lost opportunity on day two, having resumed in the morning on 274 for five.

Paine (50) and all-rounder Cameron Green (47) were in good shape to help set a platform for a much bigger total but promptly surrendered in a batting collapse when three wickets fell in four runs.

Paine was caught in the slips by Rohit Sharma off paceman Shardur Thakur, with Green following after being bowled by all-rounder Washington Sundar, one of two test debutants in the Indian side.

Playing his 100th test, Lyon soaked up the acclaim of the home crowd, pushing Australia past 350 before he was bowled by Sundar for 24 off 22 balls.

Starc chipped in a valuable unbeaten 20 before paceman T. Natarajan (3-78), the second of India’s test debutants but the pick of their bowlers, wrapped up the innings by bowling Josh Hazlewood for 11.

India’s reply began shakily after lunch, with the indefatiguable Pat Cummins having opener Shubman Gill caught in the slips for seven.

Rohit and Pujara built a 49-run partnership before the former threw away his wicket for 44 when he attacked Lyon and top-edged to Starc at long-on.

Rahane and Pujara then took no chances, adding only two runs to India’s total in six overs to tea before the rain came.