Boucher bats for ‘mate’ Kallis: ‘I will try get him back in the Proteas’ 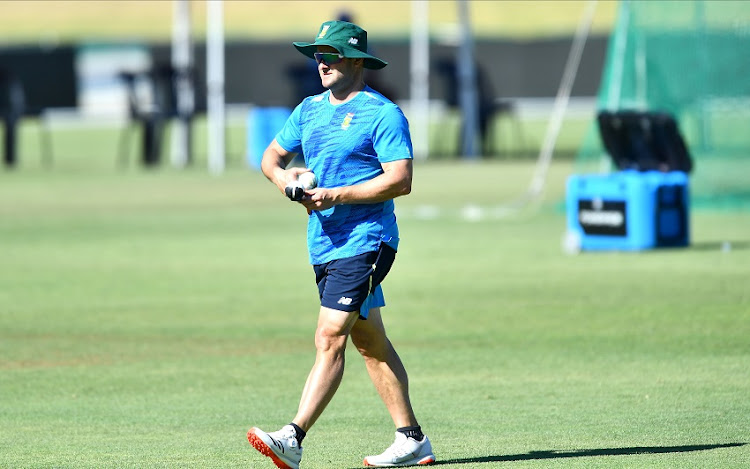 Proteas team director Mark Boucher has described losing his friend and batting consultant Jacques Kallis as “a bitter pill to swallow” and said he hopes to get the South African cricket legend back into the national team fold as soon as it is possible.

“He is a massive loss and the reason being the fact that a lot of our batters were working with him‚” said Boucher on Thursday in his departure media briefing for South Africa’s two-Test tour of Pakistan.

Kallis had to look to other nations for employment after Cricket South Africa (CSA) adopted an affirmative action policy last year.

The only time where the organisation could deviate from the controversial policy was in instances where there are no black consultants available at the level CSA required.

CSA said at the time that the policy was aimed at redressing the imbalances of the past and to radically transform the organisation.

The organisation said the policy was going to be in place until such time as the overall transformation numbers were moving in the right direction.

The contentious policy‚ however‚ was placed on hold by the new CSA interim board when it came into office in November and Boucher said the move can only help the Proteas batters if it means Kallis is able to return.

“Even during the off-season‚ I know he had a session with Temba Bavuma in Cape Town and Temba speaks very highly of him [Kallis] as well‚” Boucher said.

“There’s a lot of knowledge that Jacques can pass on to not only Temba but all of our other batters as well. I mean the guy has played over 150 Tests for this country.

“Hopefully we can have him back and it can only do the players a world of good working with a guy like that.”

The Proteas will depart for Pakistan on Friday evening for an historic tour back to Pakistan that is scheduled to start on January 26‚ and runs until Valentine’s Day.

The team will arrive in Karachi on Saturday for the Proteas’ first tour to Pakistan since 2007 and immediately go into a period of quarantine before starting with their training and intra-squad practice matches.

The Test series‚ which forms part of the ICC Test Championship where the Proteas lie in fifth position out of the nine-nation table‚ will be played in Karachi and Rawalpindi.

There was a reaction and eyebrows raised from the media and public after CSA announced Kallis’s initial appointment as batting consultant to the Proteas. Kallis is close friends with Boucher from their playing days together in the national team.

Boucher batted for his friend on Thursday and defended the appointment.

“A lot of the media‚ you guys‚ have been saying Jacques and I are mates and it is like a buddy selection‚” said the former wicketkeeper‚ emphasising that Kallis rejoining the Proteas is top among his list of priorities.

“Yes he is a mate of mine but Jacques is also a very good cricketer and has got a lot of knowledge as well so why wouldn’t we want him in our setup. So for that reason‚ yes‚ it was a bit of pill to swallow.

“But certainly over the next short period of time if we can get him involved again‚ somewhere soon‚ maybe against Australia and I think we must.”

“So‚ yes‚ he is on my radar and I will try get him back involved in the Proteas setup. I just hope that we treat him with care as well as he has shown that he has got other opportunities in world cricket as well.

“We would be stupid not to try and hang onto him and as long as we don’t mess him around. I know Jacques would love to be working in South African cricket and I’m sure that after the conversation we have had we will hopefully have him back here.”

The Proteas return from Pakistan to renew their rivalry against Australia‚ who they host in a three-match Test series later this month.

Kallis holds legendary status in world cricket for his 13‚289 runs and 292 wickets in 166 Test matches.