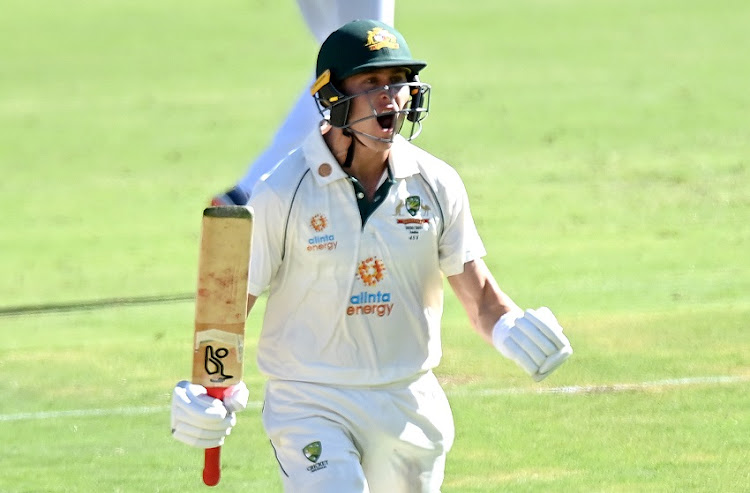 Marnus Labuschagne of Australia celebrates scoring a century during day one of the 4th Test Match in the series between Australia and India at The Gabba on January 15, 2021 in Brisbane, Australia.
Image: Bradley Kanaris/Getty Images

Marnus Labuschagne rode his luck to a home-ground century as Australia exploited India's injury woes and punished their poor fielding to reach 274 for five at the close of a steamy opening day of the fourth test decider in Brisbane on Friday.

Captain Tim Paine was 38 not out and all-rounder Cameron Green on 28, with Australia holding sway after winning the toss and batting on a Gabba pitch that flattened out obligingly for the hosts under a blazing sun.

Dropped on 37 and 48 before tea, Labuschagne feasted on India's makeshift attack in a 113-run partnership with Matthew Wade (45) before Australia's number three was out slogging for 108.

Without a single first-choice bowler available -- all sidelined or long since departed with injuries -- India blooded two debutants in paceman T. Natarajan and spin-bowling all-rounder Washington Sundar, among four changes to the 11 that held on for a courageous draw in Sydney.

Both the new boys had their moments, with Sundar claiming Steve Smith (36) as his first test wicket when the master batsman chipped a half-volley to short mid-wicket.

However, India's cards were dealt earlier in the day when stand-in skipper Ajinkya Rahane dropped a simple chance in the gully that would have removed Labuschagne for 37.

It was only the first part of a rapid double-blow, with the bowler Navdeep Saini promptly off the ground with a groin injury and unable to bowl again.

India would have had Australia at 93 for four at that point, and could have mitigated the damage had Cheteshwar Pujara held a much tougher chance at first slip when Labuschagne nicked Natarajan behind.

But from there, the tourists could not find another wicket until Australia had reached 200.

Labuschagne attacked with gusto after tea, bringing up his fifth test century with an all-run four and a glorious cover drive.

Soaking up the cheers of fellow Queenslanders in the terraces, Labuschagne ripped off his helmet and kissed its crest.

Paine got off to a watchful start but ramped up the pressure after paceman Shardul Thakur put down a waist-high caught-and-bowled chance that would have dismissed Green for 19.

Yet they could not match the heights of a thrilling first hour, when they removed both Australia's openers before drinks.

Paceman Mohammed Siraj, the two-test leader of the attack, had David Warner caught for one with the sixth ball of the morning, with Rohit Sharma diving to his right from second slip to take a brilliant, low catch.

Though cracks were opening up on an unusual Gabba pitch, Australia will be confident of building on the total at a ground where they have not lost a match since 1988.