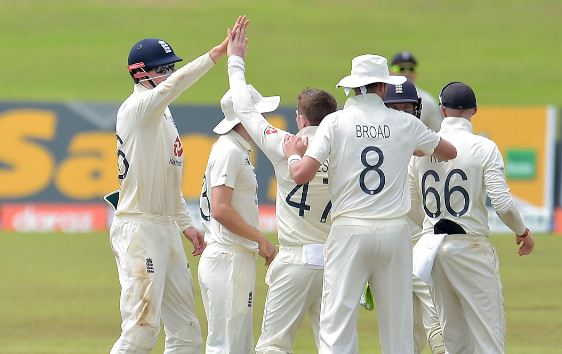 Opener Lahiru Thirimanne completed a rare test century and Angelo Mathews made an unbeaten half-century as Sri Lanka reeled in England’s hefty first innings lead by tea on the fourth day of the first test at Galle International Stadium on Sunday.

Sri Lanka were 302-7 in their second innings for a 16-run lead, but two quicks dismissals before tea kept England firmly in control.

That left England needing only three more wickets before they can bat again in their bid to take the lead in the the two-test series.

Thirimanne moved from 76 overnight to reach his century in 227 balls before becoming one of two wickets to fall in the morning session, dismissed for 111 off 251 balls.

It was his second century in 37 tests.

He had ridden his luck in the first hour but was eventually undone by the new ball as a delivery from Sam Curran nipped back and was edged through to wicketkeeper Jos Buttler.

Thirimanne had only been chosen to play when captain Dimuth Karunaratne pulled out of the test with a broken finger, but his century stakes a strong claim to remain in the team for the second test, which starts on Friday at the same venue.

Veteran Mathews batted slowly for his 50 off 164 balls and will continue with Wanindu Hasaranga (3 not out) in the evening session.

Sri Lanka lost nightwatchman Lasith Embuldeniya in the second over of the morning and captain Dinesh Chandimal went three balls after lunch when he edged Dom Bess to Joe Root at slip for 20.

Niroshan Dickwella was out for 29 after a faint edge to Bess ended a 48-run stand with Mathews before Dasun Shananka was clean bowled by Jack Leach in the next over.

Bess, who took 5-30 in the first innings, returned figures of 3-81 in Sri Lanka’s second innings while spin partner Leach had 2-97.