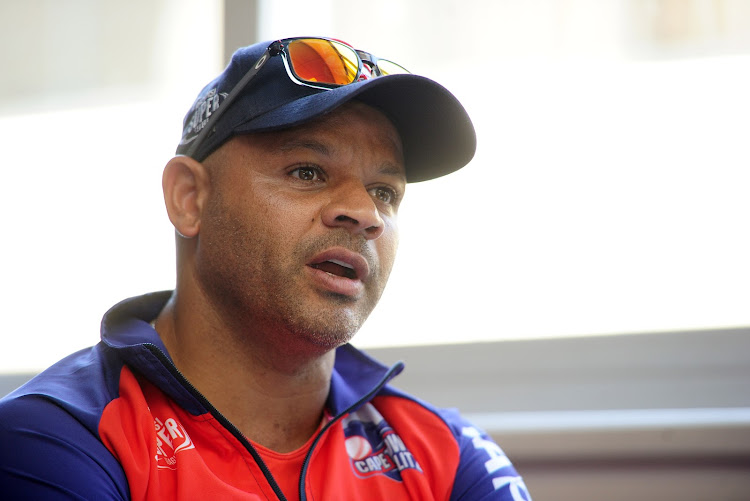 Ashwell Prince refused to talk about the Proteas or any matter related to the national team, preferring only to talk up his team Cape Town Blitz's chances in the Mzansi Super League.
Image: Ryan Wilkisky/BackpagePix

The forthright Cape Cobras coach‚ who played 66 Test matches for the Proteas and scored 3665 runs at an average of 41.64‚ said he is not “convinced” of the group structure and that the 12 provinces playing format is “the best way to go” for South African cricket.

“I know people are against opening it up and going back to the 12 provinces‚ and I know people have their reasons for that‚ but I am a firm believer that (the 12 provinces structure) is the way to go‚” Prince told reporters in a zoom media briefing.

“That’s my feeling about that (about going back to 12 provinces).

"Other makeshift kind of seven matches this and the other....two groups of three‚ I am not convinced by that‚” said Prince.

The former elegant left-hander was referring to the announcement by Cricket South Africa (CSA) on March 25 of the changing of the playing structure at domestic level.

The changed structures means that the sponsor-less four-day competition will consist of two groups of three teams each and the same will apply to the Momentum One-Day Cup.

The teams will play home and away fixtures against the other two teams in their group.

This will give each franchise a minimum of seven matches while the two group winners will have an eighth game when they play off for the title.

But Prince is convinced the 12-provinces structure is a better arrangement for the growth of the game in the country.

The 42-year-old Port Elizabeth-born Prince who scored 11 Test hundreds and as many half-centuries in his 104 innings in the Proteas jersey said CSA needed to adopt a particular domestic playing structure and stick by it.

“The sooner we come to agree on a playing structure that is going to be around for the next 10 to 15 to 20 years the better.”

CSA also said the SA Cricketers Association (Saca) endorsed the preservation of the status quo and the new playing changes.

The players union said it was concerned that the move to 12 provinces could have significant financial consequences for cricket and the players while some believed the expanded system would dilute the quality of competition.

“I know these decisions are based on finances but I am a big of fan of opening it up to more people to play‚” said Prince.

He had advice to those who believe the 12-province structure will dilute the quality of competition.

“Obviously having played cricket around the world‚ especially in England and in South Africa before the franchise system‚ I know it (the 12-province structure) works‚” asserted Prince.

“With players playing more regularly they can actually stake a higher claim for honours. I do believe there are far too many cricketers not playing regularly in South Africa.”

Prince gave an example of how provinces regards as small can produce national team players.

“Before we became franchises we had smaller provinces like Easterns produce your Andre Nel‚ Andrew Hall‚ Zander de Bryene who went to play for the Proteas coming out of the Easterns.

“You had places like Border who would give you a Pieter “Striker” Strydom‚ Steve Palfreeman and Makhaya Ntini and Mark Boucher.

“If you go back to Boland they gave you plenty. Henry Williams‚ Roger Telemachus‚ Henry Davids‚ Justin Ontong‚ Charl Langeveldt.”