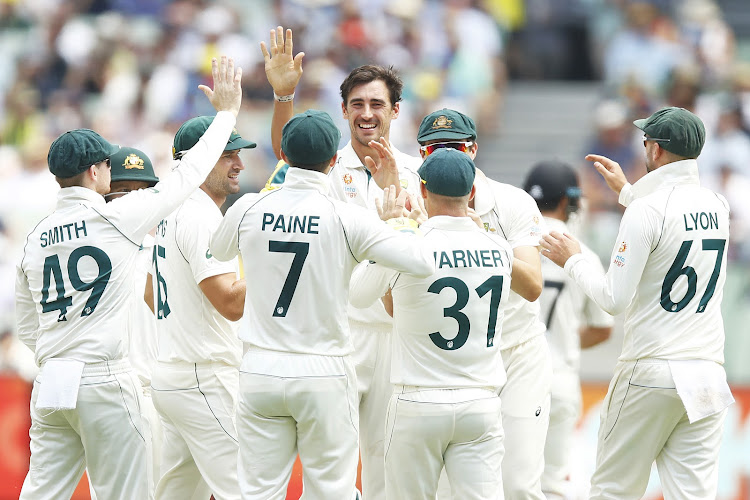 Australia marched toward a dominant series victory over New Zealand on Saturday after dismissing the visitors cheaply and building a mammoth 456-run lead on day three of the Boxing Day test.

Leading 1-0 after thrashing the Black Caps in the Perth opener, Tim Paine's Australia pushed to 137 for four in their second innings at stumps after routing the tourists for 148 in a firestorm of pace bowling at the Melbourne Cricket Ground (MCG).

Replying to Australia's first innings 467, New Zealand were bowled out 120 runs short of forcing the hosts to bat again, but Paine sent his batsmen back out to pile on the agony.

At the close, Matthew Wade was 15 not out, with Travis Head, the first innings centurion, on 12.

The equation is bleak for Kane Williamson's men, who had hoped for a result in Melbourne to keep the series alive to the third and final match in Sydney next week.

No team has ever scored more than 417 runs in a fourth innings at the MCG, and none has ever chased down more than 332 to win at the venue.

Dominated by Australia's batsmen in the opening two days, New Zealand crumbled in the face of formidable fast bowling.

Pat Cummins was chief tormentor, underlining his claim as the format's premier exponent with a blistering display of pace and precision.

He led Australia's bowling with 5-28 to continue a brilliant year.

"I've had a pretty good run lately so I can't see it getting too much better than what the last year's been but hopefully I can maintain it at that level," 26-year-old Cummins, the year's leading wicket-taker, told reporters.

He was scarcely better than team mate James Pattinson, the fiery 29-year-old quick claiming 3-34 in his return to the side as replacement for the injured Josh Hazlewood.

Only opener Tom Latham scored more than 20 runs for New Zealand, but after raising a tough half-century, he promptly gave up his wicket for 50, one of Cummins' four caught-behind victims.

Thousands of New Zealanders had flown across "the ditch" to watch their team's first appearance at the MCG in 32 years, many with hope of a better show than the 296-run capitulation in Perth.

Instead, they have seen another disaster unfold in the wake of Williamson's decision to send Australia in to bat after winning the toss.

Adding to the gloom, their pace spearhead Trent Boult suffered a fracture in his hand when struck by a Mitchell Starc ball while batting after lunch.

Having missed Perth with a rib injury, Boult will head home after Melbourne and miss the Sydney test.

"It's obviously gutting news for Trent and also for our group to have someone like that ruled out with his injuries," said Latham.

In a rare highlight for New Zealand, seamer Neil Wagner captured his 200th test wicket when he dismissed Steve Smith for seven, the fourth time he has scalped the master batsman in the series.

But Head and Wade stood firm in the final overs to ensure Australia will return on day four with victory all but assured.

"Fair play to Australia the way they bowled," said Latham.

"They were relentless and didn't really let us have anything, unfortunately."

SA’s opening batsman Aiden Markram has been ruled out of the remainder of the Test series against England after sustaining a finger injury.
Sport
2 years ago

England took a South African wicket with the opening delivery of their test series on Thursday and added two more relatively quickly to leave their ...
Sport
2 years ago

England captain Joe Root won the toss and elected to bowl in the first test against South Africa at Centurion Park in Pretoria on Boxing Day.
Sport
2 years ago
Next Article