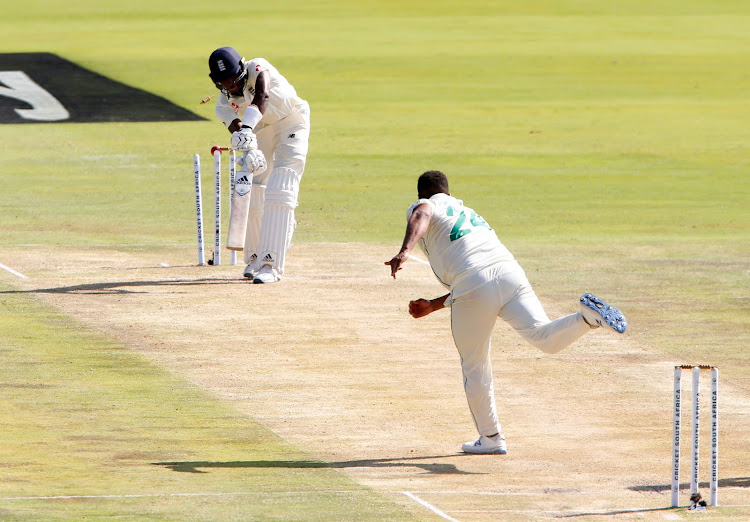 Archer bowled two full tosses at Nortje during the penultimate over that were initially called no-balls by square leg umpire Paul Reiffel‚ who strangely rescinded his second no-ball to keep the England fast bowler in the Test match.

Two successive no-balls for beamers would have seen Archer banned for the rest of the South African second innings and this did not go down well with the Proteas camp who consulted umpires Reiffel and Chris Gaffaney.

Vernon Philander‚ who was the star of the show on Friday‚ said umpires must make the right calls for the sake of the game.

“It’s an interesting one‚ I suppose the umpires will have to deal with it‚” said Philander who took 4/16 in 14.2 overs including eight maidens on day two.

STUMPS | Vernon Philander puts on a show in Centurion

“It’s tough to give an opinion but they (umpires) will have to deal with it and hopefully they make the right call for everyone going forward.

"If you are at square leg and call a no-ball‚ you obviously have to stand your ground and at no time they cancelled it‚” added Philander‚ who confirmed that he will be joining English county side Somerset next year on an initial one-year deal.

Philander said he didn’t know what happened during the discussions between SA coach Mark Boucher and the umpires in the dressing room.

“I don’t know what happened‚ what I know is that there was a little bit of conversation after the game‚" he said.

"For me it is plain and simple‚ we are playing a game and we want to set an example.

"We have to make the right call.

"Are we going to tolerate it at another game‚ the umpire should make the right call.”

Kagiso Rabada and Vernon Philander produced a breathtaking spell of fast bowling as South Africa dominated the first session of day two of the Boxing ...
Sport
2 years ago

Reflecting on his performance‚ Philander said it was all about hitting the right lines and lengths.

“It was the consistency of hitting the right areas‚" he said.

"Once you hit a good area it was hard to score for them.”

Philander‚ who is retiring after this Test series‚ said he wants to enjoy whatever is left for him in international cricket.

“With a few matches left‚ I have to make the most of it.

"It’s a decision that was planned for a long time and I have to live by it‚” he said‚ adding that anything more than 300 on day three should be enough for SA.

“I reckon 300 plus score will probably be a safe zone‚ and by saying that we have to start really well with the bat once more in the morning.

"But as you will know in Centurion you will never know what you will get.”