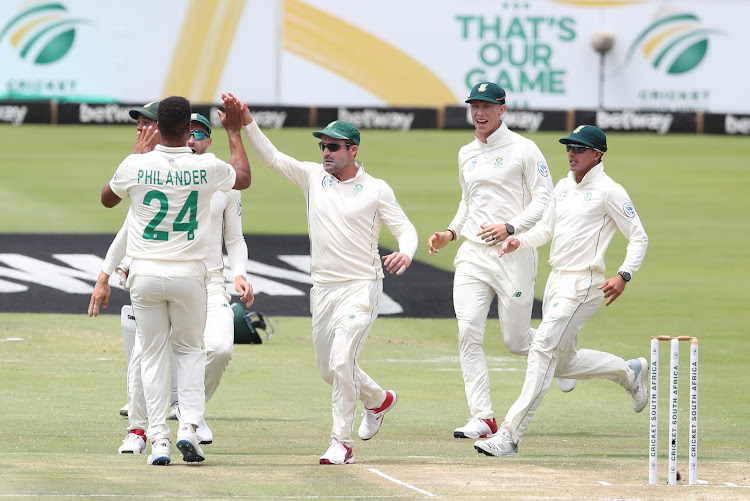 Kagiso Rabada and Vernon Philander produced a breathtaking spell of fast bowling as South Africa dominated the first session of day two of the Boxing Day Test at SuperSport Park in Centurion on Friday.

Proteas captain Faf du Plessis used his two frontline seamers for the opening eleven overs and the most destructive and economical was Philander, who ended his first five overs without conceding a single run while taking a crucial wicket.

At lunch, England were on 60/2 with Philander and Rabada having removed openers Rory Burns (9) and Dom Sibley (4) respectively during the early stages of the session.

Philander, whose movement was almost to a tee, got the first wicket of Burns when he was caught behind by Quinton de Kock and the raw pace of Rabada was too good for Sibley a few overs later. Both dismissals came off the slightest of edges as the Proteas got a perfect start.

They were assisted by Dwaine Pretorius, Anrich Nortje and spinner Keshav Maharaj, whose first over was a maiden, but the trio are yet to make any breakthrough with Joe Root and Joe Denly rebuilding England’s innings.

In the ninth over, umpires called for drinks after Root was struck on the helmet by Rabada’s 143kph bouncer but the England skipper was able to continue his innings after an on-field assessment.

It could have been worse for England in the eleventh over when Rassie van der Dussen dropped Denly, who edged Rabada’s back of length delivery as the Proteas bowlers continued to exert more pressure.

England will continue in the second session with Root and Denly looking to improve their partnership of 45 and give their team an advantage on what has proved a difficult wicket.

Before England batted, South Africa were bowled out for 284 nine minutes into day two when Philander (35) was caught behind by Jos Buttler from the bowling of Stuart Broad leaving Anrich Nortje without scoring.

The Proteas only managed to add seven runs to their overnight score of 277.

Blink and you'll miss it!

Sizzling bumper, off the helmet and over the slips for 4.

England captain Joe Root won the toss and elected to bowl in the first test against South Africa at Centurion Park in Pretoria on Boxing Day.
Sport
2 years ago

England took a South African wicket with the opening delivery of their test series on Thursday and added two more relatively quickly to leave their ...
Sport
2 years ago
Next Article