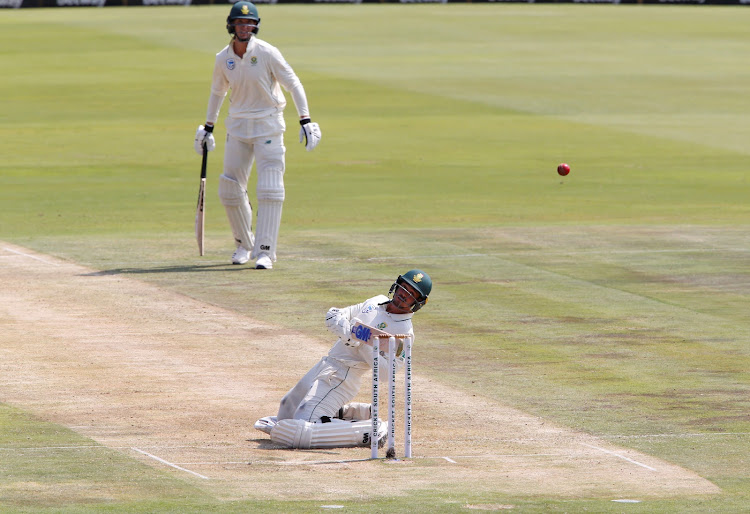 Quinton de Kock registered his 18th and quick-fire half century to help South Africa to 187/5 at tea of the Boxing Day Test at SuperSport Park in Centurion on Thursday.

Proteas were in a spot of bother on 111/5 after the loss of Dean Elgar, with the first ball of the innings, Aiden Markram, Zubayr Hamza, Faf du Plessis and Rassie van der Dussen when the aggressive De Kock arrived on the crease.

The explosive left-hander was not intimidated by the enormity of the task at hand as he immediately went on a rebuilding process with Du Plessis, with whom he shared a partnership of 14 runs, before the captain was removed by Stuart Broad.

After the dismissal of Du Plessis, De Kock was joined by all-rounder Dwaine Pretorius on the crease and they continued to keep the scoreboard ticking by putting pressure on England fast bowlers James Anderson, Broad, Sam Curran and Jofra Archer.

When umpires called for the tea break, the partnership of De Kock and Pretorius was unbeaten on 75 off 94 and coach Mark Boucher will be hoping that they withstand the pressure in the final session.

The first wicket to fall after lunch was that of Van der Dussen for 6 when he edged the ball to second slip from where Joe Root claimed a comfortable catch from the bowling of impressive Curran.

He was soon followed by Du Plessis on 29 whose outside edge made its way to well positioned Root at his first slip as another South African batsman failed to convert a good start.

South Africa ended the first session on 79/3 after they lost openers Dean Elgar and Aiden Markram (20) within the opening to the bowling of James Anderson and Curran.

The third wicket to fall on the day was that of Zubayr Hamza, who was looking good on the crease, when he became the victim of Stuart Broad as the Proteas’ top order continued to struggle early on.

England all-rounder Ben Stokes will spend Tuesday at the bedside of his father Ged, who is in a critical condition in hospital in Johannesburg.
Sport
2 years ago

England captain Joe Root won the toss and elected to bowl in the first test against South Africa at Centurion Park in Pretoria on Boxing Day.
Sport
2 years ago
Next Article