Hashim Amla sits out nets after blow to head 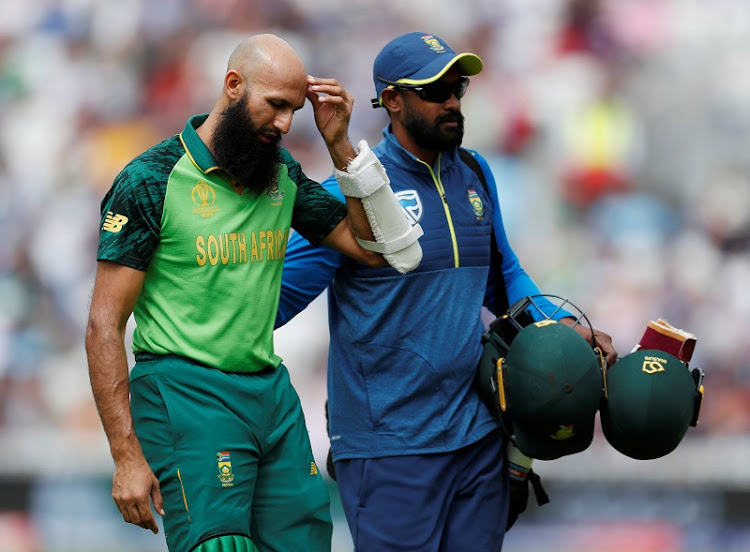 Hashim Amla retired from the Proteas' opening match after being hurt by a ball from England's Jofra Archer.
Image: Reuters/Paul Childs

South African opener Hashim Amla sat out practice on Saturday after suffering concussion in the World Cup opener, and he is a doubt for South Africa’s second game at the tournament against Bangladesh.

The 36-year-old Amla was forced to retire hurt after being struck on the helmet by a short delivery from Jofra Archer in the fourth over of Thursday's opening match against hosts England at The Oval, although he returned to bat briefly later as South Africa were beaten by 104 runs.

Faf du Plessis can’t wait to get back onto the horse. The one he rode on Thursday threw him hard and far‚ and he is hoping for a better ride on ...
Sport
2 years ago

Amla had been diagnosed with mild concussion after being hit on the grill of his helmet and went through several tests on Thursday before being allowed to return to the crease.

But the after-effects of the blow were the likely reason behind his absence as his teammates went to the nets on Saturday to prepare for Sunday’s clash against Bangladesh at The Oval on Sunday.

Fast bowler Dale Steyn, who sat out against England because of injury concerns, continued to work out in the nets but is not likely to play against Bangladesh either, with South Africa saving him for their third game, against India on Southampton on Wednesday.

Canny bowling and half-centuries by Quinton de Kock and Rassie van der Dussen weren’t enough to get South Africa over the line in their World Cup ...
Sport
2 years ago

All things are not equal at the Oval‚ where England and South Africa will get the World Cup going on Thursday.
Sport
2 years ago
Next Article