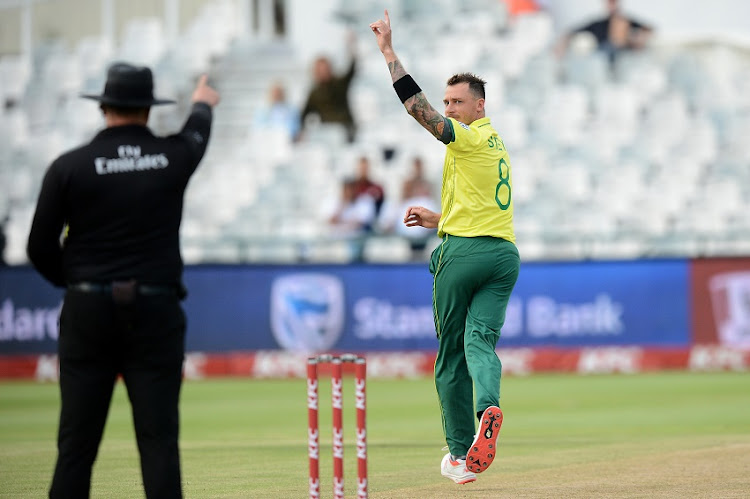 Dale Steyn made the perfect comeback to the Indian Premier League (IPL) in Kolkata on Friday. Almost.

Instead he sent it tumbling to earth.

Steyn smiled the smile of a man who has come through a hair-raising journey with his body in the past few years‚ the smile of someone who had lucked into an IPL deal because someone else — Nathan Coulter-Nile — couldn’t take up the original offer.

With that Steyn turned on his heel‚ walked back to his mark and steamed in again.

And after the last ball of that over Steyn was smiling again.

Lynn blipped an unconvincing stroke to mid-off‚ where Virat Kohli held the catch.

Kohli was on hand again at the end of Steyn’s third over‚ reaching above his head to palm Shubnam Gill’s toe-ended uppish effort and caught it on the way down.

Steyn’s first three overs cost 22 runs — 12 of them in his second when Sunil Narine hit three fours in the third — and his last bled 18 thanks largely to the two sixes and a four hit by Nitish Rana.

There were five players nursing an assortment of injuries who were named in South Africa’s squad for the Cricket World Cup in England and Wales that ...
Sport
2 years ago

But the veteran fast bowler would have been happy to be back in a competition he last graced in 2016‚ when he played one match for Gujarat Lions having spent the previous three seasons as an integral part of Sunrisers Hyderabad’s attack.

This time Stoinis held on‚ taking the catch above his head.

Steyn’s next delivery was a 144 kilometre-and-hour yorker that clattered into Suresh Raina’s stumps.

Steyn conceded six‚ five and six runs off his first three overs — Watson’s pulled four and Kedar Jadhav’s fortunate gloved effort that scooted across the fine leg ropes were the only boundaries — and 13 in his last‚ thanks to MS Dhoni heaving an off-cutter over long-on for six.

From the 2/40 he took on Friday to his 2/29 on Sunday represents significant improvement for Steyn‚ who has helped a team who lost five of their first six games before he joined them win two in two since he arrived.

Steyn was last in a RCB shirt in a Champions League T20 semi-final at Kingsmead in September 2010‚ and Kohli was pleased to have him back.

Relations between administrators and players crashed to a new low on Thursday when Tony Irish was barred from attending a Cricket South Africa (CSA) ...
Sport
2 years ago

“It feels amazing to be able to celebrate again with Dale Steyn‚” he said in an on-field interview on Sunday.

“I never thought this would be possible after we parted ways in 2010.”

Steyn was also in complimentary mood: “This man [Kohli] has gone on taken and taken the world by storm and is one of the best players if not the best in the world.

“I was lucky enough to watch him in the beginning when he was 18.”

On June 5 in Southampton‚ if all goes well‚ Steyn will be lucky enough to bowl to Kohli in South Africa’s World Cup match against India.

And Kohli will be unlucky enough to have to face him.