IBO mini-flyweight belt on the line 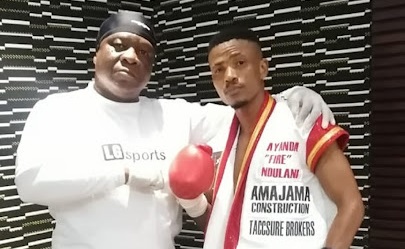 Trainer Kholisile Cengani and his boxer Ayanda Ndulani who will be defending his IBO title against Sphamandla Baleni in two weeks time.
Image: Supplied

It is factually incorrect for boxing people to distort the truth and instead misinform the fight fraternity with lies that end up hurting both the sport and boxers.

This warning was issued yesterday by trainer Kholisile Cengani, whose charge Ayanda Ndulani will put the IBO mini-flyweight belt on the line against Sphamandla Baleni at East London’s ICC Hall on November 28. The fight is in the main attraction of the Xaba Academy tournament.

He says the narrative is that Ndulani will be looking at avenging his points loss to Baleni when they fought for the WBO Africa title in 2019. Cengani, from Duncan Village, says that is taking away credit and the magnitude of the fight, and it discredits the champion.

“The truth is that Ayanda will be defending his IBO title on that date,” said Cengani, who was not in the corner when Ndulani lost to Baleni. The boxer was with new trainer Ricky Weinstein from Johannesburg. Ndulani has hit on had hard times, especially after the death of his brother two weeks ago.

“He does not need this negativity; he’s the champ and that’s it,” said Cengani, who opened his arms wide when Ndulani came back begging after losing to Baleni.

Ndulani’s win against Loyiso Ngantweni made it possible for the IBO sanctioning committee to approve him to challenge then IBO mini-flyweight holder Nkosinathi Joyi. Ndulani pummelled the former SA, IBO and IBF junior-flyweight champion into submission in four rounds in May.

Cengani paid tribute to his friend – a professional psychologist – for speaking to Ndulani after the death of his brother two weeks ago.

“That is why I am able to say that there will be no excuses,” said the mentor, whose other charge Aphiwe Mboyiya will be in action against Bongani Mbiko over six rounds.

Mboyiya is close to challenging SA lightweight champion Tshifhiwa Munyai, who stopped No 1 contender Sanele Msimanga in three rounds two weekends ago. That result should work in favour of Mboyiya in the ratings.

Mboyiya has made a dramatic comeback since 2019, after being banned for two years in 2017 by the SA Institute for Drug-Free Sport. He failed a dope test after his points win over Sibusiso Zingange for the WBO All Africa title.

His good form has earned him a top rating here.

SA’s rich history with the International Boxing Federation (IBF) junior-lightweight boxing title should stimulate Azinga Fuzile in his quest to ...
Sport
2 weeks ago

History in the local female boxing will be made on December 4 when a national title fight will be contested after a review panel of judges scored it ...
Sport
2 weeks ago

Alvarez knocks out Plant in 11th round, becomes undisputed champion

Saul "Canelo" Alvarez became the undisputed super-middleweight champion after knocking out Caleb Plant in the 11th round of their bout in Las Vegas ...
Sport
3 weeks ago
Next Article