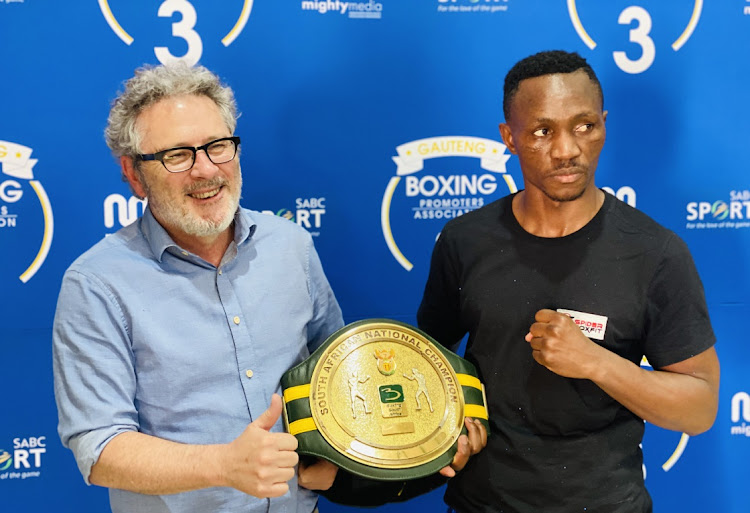 Promoter Tshele Kometsi said the Gauteng Boxing Promoters Association (GBPA) was willing to organise the shoot-out that was called on by Komanisi a few minutes after watching Munyai knocking out Sanele Msimago in the third round of the champion’s mandatory defence at Booysens Hall on Sunday.

“I spoke to Lusanda about the money part because our fight could be a career-ending one for both of us,” he said. “We cannot continue providing excitement and bringing joy to other people and walk away unhappy. One thing I am sure of is that we are going to hit each other to pieces.

“We are both redeeming ourselves. I lost my IBO belt and started all over again by winning the SA title. Lusanda also lost his IBO title and suffered other defeats, so he wants to start all over again. I will not be his stepping stone – never.”

He added: “I have been around and I have seen great boxers putting their lives and career at stake in these local fights but today they have nothing to show for those super fights. I am saying bring on Komanisi at any time and anywhere but pay us good because we will give promoters and fans value for their money.”

Munyai won the domestic title from Siphosethu Mvula last year and he registered the first defence in May with a 10th-round stoppage of Khaya Busakwe. Komanisi redeemed himself with a seventh-round stoppage of Msimango but in the lightweight division. He won two more fights and those wins earned him the No 4 spot in Boxing SA’s August ratings.

Komanisi, 32, is on the rebound after calling it quits following a fourth-round knockout by Michael Mokoena in 2018. Komanisi has won three fights in succession but against easier opponents, Msimango, Siphenathi Qampi and Sinethemba Bam.

The tournament on Sunday, organised by the GBPA, attracted an estimated crowd of 150. SABC Sport GM Gary Rathbone was in the crowd. It was the first tournament in Gauteng to welcome back fans. The tournament was aired by the national broadcaster, which was also represented by a number of radio stations.

The WBF Intercontinental title that Thato “Captain Charisma” Bonokoane won last weekend is a marginal title but to the newly crowned champion and his ...
Sport
3 months ago

The Gauteng Provincial Boxing Promoters Association will enforce lockdown regulations at Booysens Hall where its member Nomakhosi Maboya will ...
Sport
3 months ago

Marcus “King Labamba” Lebogo finally has a crown. His deserved unanimous points win after one-sided 10 rounds against Sbonelo Nzimande at the weekend ...
Sport
3 months ago
Next Article